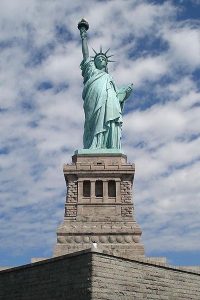 What is the American dream? It does not pertain only to immigrants, or even native-born citizens. It is rather an ideological premise of democracy, rights, liberty, opportunity, and equality, where any person has the chance to reach one’s goals—whether that be financial, spiritual, or otherwise. First, the phrase was developed in the 1700s, and later developed in the 19th and 20th centuries. Let us explore how this concept originated and how it has changed throughout the centuries.

The term “American dream” was first referred to in the 17th century by the puritans. The puritans arrived in America to find religious freedom. According to the website American Dream, “In 1630, a speech known as the “city upon a hill” sermon was delivered by John Winthrop to the other puritan settlers who traveled with him to Massachusetts. It is true that he didn’t describe his belief as a “dream”, [but] he still talked about an ideal nation that gives all the people with equal opportunities to become successful through using their greatest efforts. In 1776, Thomas Jefferson and other authors of The Declaration of Independence defined the American Dream as “life, liberty and pursuit of happiness” (The American Dream). So, though it started as a vision for religious freedom, the American dream expanded into a freedom in all spheres of American life. The expansion of this ideal was one of the progressive happenings in modern politics.

In the 19th century, the American dream meant something special to Germans. In 1848, they fled a revolution in protest of an autocratic political structure in their home country to come to the US (F. W. Bogen). According to book The German in America, “[In America] wealth and possession of real estate confer not the least political right on its owner above what the poorest citizen has. Nor are there nobility, privileged orders, or standing armies to weaken the physical and moral power of the people, nor are there swarms of public functionaries to devour in idleness credit for. Above all, there are no princes and corrupt courts representing the so-called divine ‘right of birth.’ In such a country the talents, energy and perseverance of a person … have far greater opportunity to display than in monarchies” (F. W. Bogen). In addition, with the gold rush starting from 1849, the conception of striking it rich in America led thousands of people to the New World to follow their dream of riches. In fact, it is often believed that the American dream we know of now was formed by the pioneers (Turner, Frederick Jackson).

The term “American dream” in the 20th century became more associated with a break away from class divisions and racial segregation. In his 1931 book Epic of America, James Truslow Adams popularized the term of American dream: “But there has been also the American dream, that dream of a land in which life should be better and richer and fuller for every man, with opportunity for each according to his ability or achievement. It is a difficult dream for the European upper classes to interpret adequately, and too many of us ourselves have grown weary and mistrustful of it. It is not a dream of motor cars and high wages merely, but a dream of social order in which each man and each woman shall be able to attain to the fullest stature of which they are innately capable, and be recognized by others for what they are, regardless of the fortuitous circumstances of birth or position…” (Library of Congress). On the other hand, the civil rights movement was headed by Martin Luther King Jr., who wrote about the American dream in his Letter from a Birmingham Jail: “We will win our freedom because the sacred heritage of our nation and the eternal will of God are embodied in our echoing demands … when these disinherited children of God sat down at lunch counters they were in reality standing up for what is best in the American dream and for the most sacred values in our Judeo-Christian heritage, thereby bringing our nation back to those great wells of democracy which were dug deep by the founding fathers in their formulation of the Constitution and the Declaration of Independence.” So, in the 20th century, the American dream expanded into more deeply-rooted issues in society rather than material gain.

The usage of the term “American dream” began with the puritans when referring to their right for religious freedom, but it later progressed into a more philosophical notion of the equality of all people in light of status or standing. With the current political climate in Washington, we will see if the American dream stays intact or is once again reformed.

Library of Congress. American Memory. “What is the American Dream?” lesson plan.