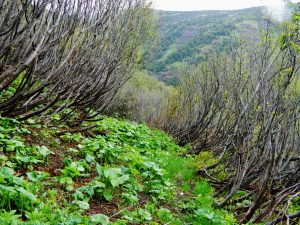 The name Carpathians has several origins, since it spans such a large range of countries. It is mostly associated with the Dacian tribe who were, in ancient times, called “Carpes.” They settled in a vast area, from the northeast of the Black Sea all the way to where present-day Romania and Moldova stand. Digging deeper, the word Carpates derives from the Proto Indo-European root *sker-/*ker-. This root follows a path to the Albanian word karpë, which means “rock,” and to the Slavic word for rock or cliff, skála (Room, Adrian). At any rate, the word Carpathians has a rich history that dates back to the second century.

Though the Alps are considerably close to the Carpathians, they have distinct geology. According to Britannica, “Their structure is less compact [than the Alps], and they are split up into a number of mountain blocks separated by basins. Structural elements also differ. The sandstone–shale band known as flysch, which flanks the northern margin of the Alps in a narrow strip, widens considerably in the Carpathians, forming the main component of their outer zone, whereas the limestone rocks that form a wide band in the Alps are of secondary importance in the Carpathians” (Kondracki, Jerzy A). There are more variances between these respected mountain ranges. “On the other hand, crystalline and metamorphic (heat-altered) rocks, which represent powerfully developed chains in the central part of the Alps, appear in the Carpathians as isolated blocks of smaller size surrounded by depressed areas. In addition to these features, the Carpathians contain a rugged chain of volcanic rocks” (Kondracki, Jerzy A). This gives us an understanding of the uniqueness of the Carpathians, and even each mountain range, as we can understand that even mountain systems that are close to each other can vary widely in geology.

I hope this has been a proper glimpse into the technical information about the Carpathians. Of course, with its deep history, its wonderful geographical features, and its unique geology, it is best to witness its splendor in person. So, when you are visiting one of the countries that inhabit the Carpathians, be sure to visit this mountain range to see its majesty for yourself.

“The Carpathians” European Travel Commission, in The Official Travel Portal of Europe.