The History of the Wedding 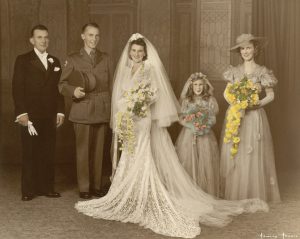 Weddings seem like a natural part of our human existence. But they did not pop out of nowhere: they originated from ancient traditions. There are countless wedding traditions from across the globe, and it is difficult to pinpoint when weddings started to take place. However, through evidence and approximation, we can assume various facts about when the first weddings took place.

Approximately 23,000 years ago, when people started to grow their own food, and began to live in more compact communities, marriages probably were initiated. People staying closer together, instead of being nomadic, was most likely the first cause of marriages. Before agriculture, it might have been common for people to have a spouse for a few years and then move onto another partner due to the nomadic way of life and a lack of organization in terms of settlement (Adshade, Marina). According to the website Yesterday, “Early marriage was borne of ancient societies’ need to secure a safe environment in which to breed, handle the granting of property rights, and protect bloodlines. But even in these early times, marriage was much about love and desire as it was social and economic stability” (Yesterday Channel). It is surprising, but the reason for marriage has hardly changed since ancient times, with finances and feelings intermixed in the decision to get married.

Like many things, marriage by law began in ancient Egypt. Ancient Egyptian society coalesced around 3100 BC (Digital Egypt for Universities), and unfortunately incest was an integral part of the royal Egyptian society at that time. According to Wedding Zone, “Many Pharaohs took sisters and daughters amongst their numerous wives, the idea being to keep their dynastic bloodline truer than it would otherwise had been. Although, this practice was not that common among middle and lower classes. Here, the marriage also existed as a legally enforceable fact, and the wives actually had more rights in this ancient land than for a large segment of modern western history, including the right of divorce” (Wedding Zone). In its turn, the wedding engagement was also founded in Egypt, where the couple would retain all the rights one would have in an actual wedding and would be a test period for the actual marriage. Like many ancient cultures, a dowry was involved. Unlike dowries in India, the man would pay the bride’s family money in order to show that he was capable of providing for his future wife. The wedding itself involved loads of colors, songs, dancing, and fresh wheat being thrown by participants to wish the married couple fertility.

Since ancient Egyptian society and culture was so grandiose and influential, it is no surprise that other societies around that time started to have weddings as well. In the Old Testament, there are several instances describing marriage and weddings in ancient Israel. According to Bible Odyssey, “First, although girls were expected to be virgins when they got married—and according to Deut 22:21 could even be put to death if they were found not to be—men were allowed to marry multiple women. It is hard to know how common polygamy really was in ancient Israel. Also, the evidence suggests that compared to women, men had more control over whom they married. Most likely, girls were married around puberty whereas men were somewhat older. Though unions were generally based more on economic or social considerations than romantic ones, some texts, including the Song of Songs, show us that ideas of passion and sexual love were also present in ancient Israel” (Covenant in the Hebrew Bible). But it was not until the Roman Empire that marriage started to incorporate the modern practices of handing over rings and such. It was believed in ancient Rome that marriage was the only legitimate way to produce children and to have a dignified standing in society. Also, iron rings were given in wedding ceremonies, and soon after the couple would sacrifice an animal and ask blessings from the gods for their marriage. The basis of western weddings came from the Roman Empire (Rome Across Europe).

There can be volumes more to say about the development of the wedding ceremony, however we have limited space in this essay. But we should mention that weddings developed out of agriculture, which made communities less nomadic. Weddings began as a way to secure a family unit, though marrying within the family (incest) and being polygamy was not often frowned upon in the ancient world. It was not until the end of the Roman Empire that polygamy was formally banned. From then on, monogamy became more of a standard, and what we often know of today as married life in the modern world.