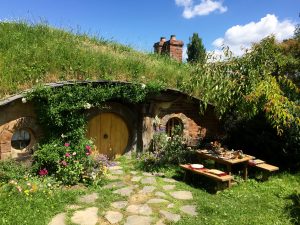 The Hobbit, written by J.R.R. Tolkien, is a children’s fantasy novel (though the series The Lord of the Rings that followed its story was more tuned to adults) that was first published in 1937. When it was first released, it received critical acclaim from millions of readers, and it was eventually nominated for the Carnegie Medal and won “Best Juvenile Fiction” from the New York Herald Tribune. However, despite its success, the most enduring trait of the novel is its connection with readers throughout generations that has inspired countless authors and readers. Most people know the story of The Hobbit, so in this essay, we will explore the creation of this beloved literary work.

Tolkien was an academic, being a professor at Pembroke College at Oxford. In the early 1930s, his works mostly consisted of children’s literature, which included poetry, nursery rhymes, and other types of writing for young adults. At this time, he was even making his own elven language and mythology, which he had been developing since 1917 (Rateliff, John D.).

According to a letter Tolkien sent to W.H. Auden in 1955, Tolkien began writing The Hobbit in the early 1930s while marking up papers by his students. He saw a blank page, and started to write, “In a hole in the ground there lived a hobbit.” He was greatly inspired to write the story, and the first manuscript of The Hobbit was finished in 1932 (Carpenter, Humphrey). He handed the manuscript to his friends, including C.S. Lewis and Elaine Griffiths, a student of his. Griffiths later was the catalyst for the publishing of The Hobbit. When a staff member of the publishing company George Allen & Unwin, Susan Dagnall, came to Oxford, Griffiths either lent the book to Dagnall or was suggested to borrow it from Tolkien. Dagnall enjoyed the novel, and handed over the manuscript to a 10-year-old boy to receive a child’s point of view. With a favorable review from the child, George Allen & Unwin agreed to publish The Hobbit (Carpenter, Humphrey).

Before getting into how the book became a success, let us look into Tolkien’s influences for the story. William Morris, who was a 19th-century English poet, translator, and creative genius, was a significant figure to Tolkien. In fact, Tolkien desired to write more in Morris’ romantic style. In particular, a chapter named The Desolation of Smaug was directly influenced by Morris’ style and ideas (The Letters of J.R.R. Tolkien). Another writer that left an impression on Tolkien was Samuel Rutherford Crockett. His historical novel The Black Douglas and its villain Gilles de Retz inspired The Hobbit‘s evil character Sauron. It is said the narrative style and even the events in both The Hobbit and The Lord of the Rings were influenced by The Black Douglas (Lobdell, Jared C.). The goblins within The Hobbit are closely associated with the goblins in the novel The Princess and the Goblin by George MacDonald. In addition, MacDonald impressed upon Tolkien the role of fantasy in the context of Christianity (J. R. R. Tolkien Encyclopedia: Scholarship and Critical Assessment). Another key influence on The Hobbit is Tolkien’s adoration of Norse mythology and Germanic philology. Not only are many myths from Norse mythology adapted into The Hobbit, the names of the characters have a distinct Old Norse feel to them (Rateliff, John D.). And speaking of characters, the dwarves were modeled after ancient Jewish people and their history (Rateliff, John D.). Last but not least, the epic Beowulf was the main inspiration behind the world Tolkien wanted to create. As Tolkien was a respected scholar of Beowulf, The Hobbit was in part a tribute to the epic and a reworking of it (Purtill, Richard L.).

After The Hobbit was published in 1937 on the 21st of September, it quickly sold copies amidst highly favorable reviews (Hammond, Wayne G.). Already by December of 1937, the publisher was asking for a sequel. Tolkien had to rework some of The Hobbit to match the tone of the sequel that eventually became The Lord of the Rings. In fact, he was still making edits to The Hobbit until 1966, through many editions (The Annotated Hobbit).

The Hobbit, which jumpstarted Tolkien’s career as an author, became not only a success, but also a worldwide phenomenon of fantasy and mythology. The Hobbit and the ensuing trilogy of The Lord of the Rings is so ingrained in world culture, that it is now unimaginable to think of our planet without this treasured novel. Through Tolkien’s love of literature, he incorporated many tales into The Hobbit, and improved their plots, mythology, and sense of kinship with readers.