The Life of Donald Trump 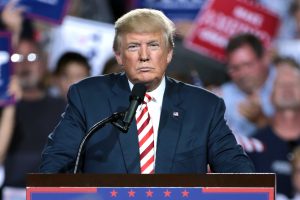 You might know him as the 45th President of the United States of America, or a reality television star. Other people might refer to him as an idiot, narcissist, and nasty individual—these are all facets of his personality. But in order to avoid bias and political rants, we will explore the facts of his life. Though there may be a mystery clouding the activities at the White House, there are not many illusions about the kind of life Trump has led.

His childhood was practically painless. He was born on June 14, 1946 into a wealthy family, as the fourth child of prominent New York real estate developer Fred Trump, and housewife Mary Trump (BBC News). His grandparents on both sides of his family were immigrants—his father’s side came from Germany, and his relatives from his mother’s side came from Scotland (Kranish, Michael, and Marc Fisher). He was raised in Queens, New York, and attended the Kew-Forest School from kindergarten until the seventh grade. At the age of 13, he was sent to the New York Military Academy, a private boarding school, as his parents wanted to polish his character (Kranish, Michael, and Marc Fisher). After graduating from high school, Trump went to Fordham University in 1964, and two years after, he transferred to the Wharton School of the University of Pennsylvania (Blair, Gwenda). During his time at Wharton, he worked at his family business, and graduated on time in 1968 with a Bachelor’s of Science degree in economics (University of Pennsylvania).

In the same year, Trump started working full-time at the family company, E. Trump & Son. The company focused on owning middle-class rentals in New York City. Aiding his father for three years in revitalizing certain complexes, senior Trump became chairman, and junior Trump became the president of the company. When this change happened, Donald renamed the company “The Trump Organization” (Blair, Gwenda). The focus of the company on outer-boroughs of New York City came to a halt in 1978 when The Trump Organization purchased a 50-percent stake in the Commodore Hotel. By 1980, the hotel was reopened as the Grand Hyatt Hotel (Wooten, Sara McIntosh). Also, in 1980, Trump aimed high again by building a skyscraper in Midtown Manhattan by the name of “Trump Tower” (The New York Times). From this time, there seemed to be no looking back for his estate career: he made or acquired the Wollman Rink in Central Park (1980), the Mar-a-Lago estate (1985), the Plaza Hotel (1988), the Trump International Hotel and Tower (1994), Trump Building (1996), Trump Place (1997), the Trump World Tower (2001), and Trump Park Avenue (2004). In addition, The Trump organization owned and/or built various golf courses, casinos, brands, sports teams, Miss Universe pageants, the Trump University, and the Donald J. Trump Foundation (Tigas, Mike, et al). Though, with all this success, Trump filed for bankruptcy six times (Fiorina, Carly), and got married three times (Avella, Joe). He now has five children, with three sons, and two daughters.

Despite this roller coaster of success and failure, Trump’s name became synonymous with “billionaire” and “brash” through his hit television show “The Apprentice” that began to air in 2004. Trump was its host and judge for 14 seasons, and during this time period, Trump became a household name (The Washington Post). This growing success, by most accounts, made his run as a Republican presidential candidate in 2016 triumphant. Though the reality star and business tycoon was an unlikely choice for being the 45th president of the United States, the majority of political experts believe he won the election due to Hillary Clinton being an unfavorable opposing candidate, his 24/7 media attention, and his personality seen as different from the usual politics (Zurcher, Anthony). Though he ran a wild, scandal-ridden, and unconventional campaign, he won the electoral vote for being president, and is already talking about reelection.

Donald Trump might be the most talked about person in the world at that moment, despite his presidential win being almost two years ago. Born into a rich family, he was raised in a manner that would befit him as the next president of his father’s real estate company. After obtaining a bachelor’s degree, he quickly became engrossed in working full-time for his father company, and moved the focus of the organization to big buildings rather than middle-class rentals. From this decision, he has built a powerful brand that was only strengthened through his long stint as a reality television star. Through this significant image, he was catapulted into the political arena, and successfully ran as a presidential candidate, becoming the 45th President of the United States.

“Two Hundred and Twelfth Commencement for the Conferring of Degrees” (PDF). University of Pennsylvania. May 20, 1968.