The Power of the Playful

Imagination and precision are two attributes that we might think are in conflict, with the former being a product of freedom and the latter a matter of fact-based exactitude. But must they be perpetually at loggerheads? Can the seemingly fey lead to a clearer apprehension and comprehension of deeper, and possibly permanent, realities? An exhibition of works by Paul Klee—the UK’s first major show of his art for over a decade—gives us a chance to consider these questions. 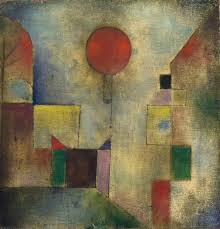 Born in Switzerland in 1879, Klee started out as a musician, but decided to become a painter instead and, after a period of training in Munich followed by a visit to Italy, returned to his homeland early in the last century and began etching before going to Germany, where he launched himself into a successful career spanning the years between 1906 and 1933. He was involved with the Expressionist Blaue Reiter (Blue Rider) group, which included Kandinsky and Marc (the group’s name originated from both artists having a mutual liking for blue, whilst Kandinsky liked riders, and Marc horses) which was, arguably, the most important modern art movement in pre-Great War Germany. Klee would—after the end of the war—go on to teach at the Bauhaus in Weimar and Dessau, followed by a period at Dusseldorf Academy. Now, with an exhibition building on new research, and containing paintings, drawings and watercolours from collections around the world reunited and displayed in a way originally intended by their creator, we have a fresh chance to examine Klee’s work. Which works best give us an idea of what he was trying to achieve?

Klee defined his work of free fantasy as ‘taking a line for a walk’. But what Klee had in mind here was a series of imaginative strolls. In ‘Flower Bed’ (1913) we get an explosion of browns and reds and greens, whilst ‘Friendly Place’ (1919) appears to be a bustling cafe full of human interaction. ‘City Between Realms’ (1921) gives us a series of Heath Robinson-like hanging shapes. ‘Comedy’ (1921) appears as anything but—it strikes an ironically disturbing note with a series of cartoon-like figures radiating fear, confusion, and up-for-it sexuality. ‘Analysis of Diverse Perversities’ (1922) shows a figure with a telescope along with a bird among machines. ‘Fish Magic’ (1925) gives us fish which, although they are in dark water, still stand out clearly in view. With Valpurgis Night’ (1935) we have sinister, jagged, yet flowing witch-like figures with pointy countenances looming up against a night sky. In ‘Park near Lu” (1938) the depiction of this place appears mysterious: it can either be taken as a riot of bushes and branches, or as map-like, showing its layout of paths and trees.

But—as the varied and sometimes disturbing contents of this selection hints—there was more to Klee’s work than met the eye. He did not simply want to be some kind of amusing illustrator. Rather, he envisaged his work to be a reflection of transcendence and we can see him almost striving to get beyond the outward and visible to the inward—the essence of existence—in his ‘Static-Dynamic Gradation’ (1923) and ‘Steps’ (1929). The former shows different coloured oblongs, as if radiating from a single centre, whilst the latter shows similar shapes but in ordered rows. It is as if he is clawing his way, on his knees and with bare hands, down to buried treasure; the inner core of existence. During his time at the Bauhaus, Klee wrote a book, The Thinking Eye, in which he put forward his theory of visual equivalents for spiritual states. Indeed, some of his work resembles a combination of paintings and symbols, a sort of fusion of visual art with writing so, in ‘Greeting’ (1922), we see how he uses red and blue arrows facing each other to suggest the act of meeting.

He may have had a single vision, but he combined different sources to achieve it. He sometimes wanted to express concepts in an almost mathematical way. And in trying to achieve this, he used not only the natural world but also music. He attempted to use visual forms to illustrate music, believing that his favourite musical form—eighteenth-century counterpoint—could be depicted by gradations of colour and value. Klee also valued the art of children and the purity of their expression, which he felt it reflected (although it might be argued that, with children’s art, directness and immaturity can go hand in hand, making it a potentially detrimental form of depiction for its adult users and admirers alike).

But whilst Klee and his associates were triumphing in the art scene, the Nazis were winning the battle of the streets. In 1933, when Hitler came to power, Klee was dismissed from his teaching post by them and then left for his homeland. They regarded his output as ‘degenerate art’, removing some 102 of his works from German galleries. Klee, meanwhile, became even more prolific, despite the twin burdens of flight from the productive venue where he had spent most of his working life, combined with bad health. He died in 1940.

On one level, it is easy to see why the Nazis judged Klee’s work as they did. He was influenced by Blake, Beardsley, Ensor, and Goya. In other words, his work was a risky mixture of the mystical, the decadently camp, the macabre, and the harshly realistic. Either disaster or genius could emerge from such a combination of influences: the outcome would be the latter.

Today his work can appear fanciful, but it is clear why it appeared decadent to those whose taste was governed by fearful philistinism afraid of anything which, however whimsical, might appear as some sort of serious challenge to the concept of order: there is, in what we see here, a positive exuberance combined with an individualistic sense of the visionary which combine to challenge the mass conformity of the party—any party. (The same can be said about Surrealism, with its attempts to depict the disturbing content of the sub-conscious.) But it can be said that—whether they realised it or not—the real threat to the Nazis was not from Klee’s whimsicality: it was from the way his work, with its search for essences, suggested that there were truths which were deeper than the simplistic blood and soil beliefs of Nazism. (In connection with Klee’s search for deeper realities, with their implication of order which could be examined—and so evaluated and tabulated—it is both interesting and relevant to note that he inscribed numbers on his works with in accordance with a personal cataloguing system: one wonders how many agents and gallery-owners would wish that their clients followed suit today.)

Klee’s work in this exhibition can be said to show the power of the playful. But it also shows the threat of the radical, especially when it is expressed with playfulness. And it has relevance for us today as it has the possibility of a serious application given the current never-ending cascade of signs and symbols with which we are confronted and have to evaluate. Klee gives clues about how they can be positively mastered to show the hidden meanings to which they may point.

Written under a Creative Commons Licence, with some edits: https://creativecommons.org/licenses/by/1.0/