The Western Wall of Jerusalem 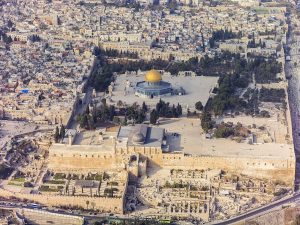 Jerusalem is often referred to as the city of three religions. Throughout the thousands of years that it has existed, this city had been conquered, ruined, rebuilt, and conquered again countless times—Islamic, Christian, and Jewish forces struggled to gain control over Jerusalem. There were also times when the city was peacefully inhabited by the representatives of all three religions; those were the times of extensive construction, development, cultural exchange, and trade. During these periods, a lot of significant and nowadays famous places were raised, which now serve as objects of pilgrimage for hundreds of thousands of people all over the world. However, there is one place in Jerusalem that is not only the most ancient among all the holy places of this city, but probably the holiest one: the remnants of the Second temple, the Western Wall.

This is indeed a great and unique place; built in a Jewish city, being a holy place for innumerable Jewish people, the Western Wall is, at the same time, a place for everyone’s prayer. There is no religion whose adepts would be prohibited to pray near the wall. As the Bible says, when King Solomon built the first Temple, he asked God to hear and answer the prayers of not only Jewish people, but of others as well (1-Kings 8:41-43). In the prophet Isaiah’s revelations, the Western Wall is called “a house of prayer for all nations,” and according to the Kabbalah, prayers said near the wall will ascend directly to heaven, regardless of whom they were said by. As a proof of these stories, any day when you come the wall, you will see a diverse crowd, dozens of ethnicities and hundreds of people, praying and crying near it. Why crying? When the first Temple was destroyed, the Gates of Heaven, almost all of them, were shut; the only Gate remaining open was called the Gate of Tears—this is what the legend says; this is why people, when coming to the wall, pour out their tears, and this is why the Western Wall is also often called the Wailing Wall (Jerusalem Insiders Guide).

The first Temple, built by Solomon, was destroyed in 586 BC by the Babylonians; the Western Wall and the second Temple was built later by King Herod the Great, wishing to restore the Temple to its former glory. The Western Wall was one of four walls King Herod built to support the huge plaza on which the Temple stood. Its length was almost 1,500 feet long, and the height reached 90 feet; about 60 feet of the Wall went under the ground. The second Temple, however, could not avoid the destruction either: in 70 CE, it was burnt down by the Romans, except legend says, for the Western Wall. During the division of Jerusalem, between 1948 and 1967, Jewish people were completely separated from the Wall, as it had happened countless times in the past, when they had to overcome all kinds of obstacles and subject themselves to dangers, only to commit a pilgrimage to this holy place. After the Six Day War in 1967, Jerusalem was reunited, and the Western Wall once again became a place of worship, unity with the divine, and the symbol of love and devotion of the Jewish people for their Holy City (GoIsrael).

The Western Wall is one of the most miraculous and sacred places on earth. It is said that the prayers spoken near the Wall are never left unanswered. Being a demonstrative illustration of the hardships Jewish people had gone through for centuries, the Wall is, at the same time, a symbol of faith and devotion, a holy place of pilgrimage for people of all religions, and a true religious wonder that has endured for thousands of years until present days.