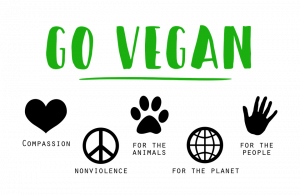 It is now a fashion in developed countries to be a vegan. With all the mistreatment of animals in factories and farms, animal hunting, and all the chemicals injected into animals raised as future food, countless people have chosen to be vegans. What exactly is a vegan? A vegan is an individual who chooses to not use or consume animal products in regard to food, clothing, and other uses based on principles, health, and the environment.

First, we can provide a brief history of veganism. Time magazine explains that, “…though the term was coined in 1944, the concept of flesh-avoidance can be traced back to ancient Indian and eastern Mediterranean societies. Vegetarianism is first mentioned by the Greek philosopher and mathematician Pythagoras of Samos around 500 BCE. In addition to his theorem about right triangles, Pythagoras promoted benevolence among all species, including humans. Followers of Buddhism, Hinduism, and Jainism also advocated vegetarianism, believing that humans should not inflict pain on other animals” (Suddath, Claire). Vegetarianism originally caught on in the West through the religious sect The Ephrata Cloister in 1732 in Pennsylvania, but it was not until 1944 when Britisher Donald Watson created the term “vegan” for people who are vegetarians that also do not eat eggs and dairy products. Watson could not have foreseen the impact his new term would have in the future.

Veganism is most often a choice—not a dietary plan or prescribed diet from a doctor. According to The Vegan Society, “Vegans avoid exploiting animals for any purpose, with compassion being a key reason many choose a vegan lifestyle. From accessories and clothing to makeup and bathroom items, animal products and products tested on animals are found in more places than you might expect” (The Vegan Society). Most vegans agree with the scientific assertion that humans are just another animal, albeit more developed and sophisticated. Therefore, in our advancement, we should not, as most vegans believe, harm other animals for our own purposes.

In terms of health, scientific studies have proven that the vegan diet is often more nutritional than the average diet. As The Vegan Society states, “More and more people are turning to a vegan diet for the health benefits: increased energy, younger looking skin and eternal youth are just some of the claims from enthusiastic plant eaters. Well-planned plant-based diets are rich in protein, iron, calcium and other essential vitamins and minerals. The plant-based sources of these nutrients tend to be low in saturated fat, high in fibre and packed with antioxidants, helping mitigate some of the modern world’s biggest health issues like obesity, heart disease, diabetes and cancer” (The Vegan Society). Also, eating meat is hard on the liver and other organs, whereas a plant-based diet is less troublesome to these organs.

Many vegans believe that veganism is a solution to environmental issues. According to Your Daily Vegan, “Raising animals for food is the single greatest human-caused source of destruction to our environment. It is the largest source of greenhouse gases, land use and degradation; the number one source of water pollution and rainforest deforestation. It’s also a major contributor to air pollution, ocean dead zones, habitat loss, and species extinction” (Your Daily Vegan). All the materials used to house and maintain these animals are also detrimental to the environment. The statistics about land usage and deforestation in connection to farming animals for food are alarming. Your Daily Vegan points out that, “Raising animals for food uses 45% of Earth’s total land and is responsible for up to 91% of Amazon destruction, with 1-2 acres of rainforest being cleared every second” (Your Daily Vegan). This shows that if more people took up the vegan diet, land usage and deforestation would substantially lessen.

Though veganism is popular nowadays, it began as a religious and eventually mundane practice. However, currently, veganism is connected to the philosophy of being harmonious with other animals (we are animals too, according to science) and not wanting to cause them harm in any form—whether it be through food processing, clothing, and the products we use. Veganism is promoted as a health and environmental solution to many issues. Therefore, it should not be discounted as only a fad.