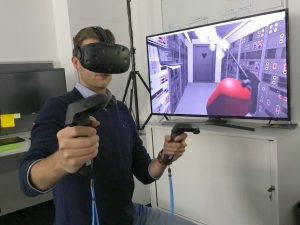 It is probably difficult to find a person in a developed country who has not heard of virtual reality. First depicted in dystopian science-fiction movies of the 1980s, it quickly became more than just a concept or a science-fiction setting. Today, we speak of virtual reality as something already invented, familiar, and even mundane. Devices such as Oculus Rift or Samsung Gear are sold everywhere, and they are not even that expensive. Different companies and websites have started offering at least some of their services in virtual or augmented reality. VR and AR are being actively explored by advertising and marketing agencies. In other words, from terra incognita, virtual reality has quickly turned into a newly-conquered land which requires development. Let us take a closer look at the ways virtual reality can be of service nowadays.

Obviously, gaming and entertainment were among the first industries to adopt virtual reality. A number of companies started developing video games, movies, and other digital content almost immediately after the technology became available. With the help of special VR gear, a user can submerge into a realistic experience, which is entirely fictional. For example, a well-known space simulator “Elite: Dangerous” allows players to test themselves as pilots of a spacecraft, exploring a vast universe, participating in space battles, trading, and interacting with thousands of other players. VR gear provides an extremely-immersive simulation, making a gamer “see” the world of the game not on screen, but with his or her own eyes, getting “inside” of it. Games such as “Subnautica,” “Farpoint,” “ADR1FT,” and many others do the same: offering gamers a paradox of facing realistic situations never possible in real life (Techradar). The same applies to cinema, theater, and other forms of entertainment: each user gains access to their own personal theater, a huge virtual screen; or, even better, a user may find themselves surrounded by the events going on in a movie or play by its sounds, visual effects, and actors (Livescience). Undoubtedly, virtual reality is capable of eclipsing all the previously-known forms of media entertainment with ease.

There are, however, more serious and beneficial applications of this amazing technology. In particular, healthcare and medicine are the two fields that supposedly benefit from the invention of virtual reality the most. To start with, VR technology allows creating realistic simulations of the human body, with all of its internal organs, tissues, and fluids: there are software developers such as Conquer Mobile and Surgical Theater who specialize in creating extremely credible and realistic 3D models using real medical data (Livescience). These simulations can be used by both medical students during the course of their studying, and professors willing to practice difficult surgical procedures prior to real operations. In addition, VR technologies can be used to cure not only the body, but to alleviate the mind as well. It is well known that people who witnessed or participated in extremely stressful events often fall victim to post-traumatic stress disorder (PTSD). The most common risk groups are soldiers, policemen, and people living in conflict zones. Usually, recovering from PTSD involves a patient’s direct participation; through the careful recalling of traumatizing events and/or feelings under the supervision of a psychologist, a patient gradually learns to substitute them with more positive ones. VR technologies can be effectively used for both of these purposes. Since it is controllable and safe, a patient with PTSD may feel safer when engaging in treatment. Besides, unlike imagination and/or memories, virtual reality feels more real, so the effects of treatment can also manifest themselves faster (Technobyte).

Another surprising application for VR technology is city building and architecture. Usually, it takes plenty of time to design, draw, and render a model of a building, let alone test it for convenience, or check out how it would fit into the surrounding cityscape and infrastructure. Virtual reality allows architects to design city environments faster, and test them prior to construction. For example, it becomes possible to test a projected building on fire safety, simulating the speed and ease (or complexity) with which people inside it can exit in case of an emergency (Entrepreneur).

Sightseeing, exploring the cultural heritage of different countries, virtual tourism, and even visiting museums become possible with virtual reality as well. Nowadays, everyone has already got used to panoramic and 360 photographs from Google Earth and elsewhere. The next step, logically, would be to recreate areas of historical or cultural interest, for instance. Instead of looking at a photo of the Acropolis, one could be standing right in front of it—all due to VR gear and special software. Visiting museums and getting oneself introduced to the famous artistic masterpieces is yet another possibility to explore. A number of important museums already offer virtual tours. For example, in 2015 the British Museum in London opened its first virtual exhibition, and the American Museum of Natural History in New York shared some of its collections with everyone interested in it via Google Cardboards. These are just the first steps, but undoubtedly, with each year, more and more possibilities for virtual tourism and sightseeing will become available for the users of VR gear (Livescience).

Art is obviously a field in which the possibilities virtual reality grants can be applied fully. Contemporary artists have quickly embraced VR as a new dimension for the embodiment of their ideas, and started constructing all kinds of experiences, impossible to recreate by conventional means such as oil. 3D sculptures created from colorful light, surreal fusions of sounds and images, new peculiar environments to explore—these are just some of the examples of artwork possible to create in VR. One of the most complex pieces was created by an artistic duo from Belgium; it is called STYX, and it recreates the experience of swimming down the great river of the dead from Greek mythology. The artists went as far as simulating the sensations of wind and touch (Technobyte). In other words, the potential of VR technology for art is great.

As it can be seen, virtual reality is not meant just for gaming. Although the entertainment industry was among the first to start exploiting the potential of this new technology, there are other fields in which VR can become extremely useful. For example, it can be used in medicine to recreate real-life surgical experiences for students and doctors, or to help during the treatment of psychological disorders such as PTSD. VR can be employed in architecture to design city environments faster and more effectively. It can also be used for the purposes of sightseeing and tourism, and many contemporary artists nowadays use it as a new dimension to create artwork in. Generally speaking, virtual reality is a prospective and promising technology, the potential use of which is yet to be explored.

“What Are the Possible Applications of Virtual Reality?” Technobyte, 19 Sept. 2017, www.technobyte.org/applications-of-virtual-reality/.