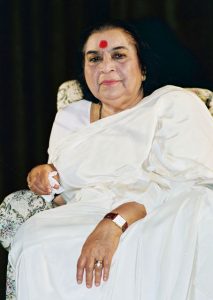 Meeting a famous person is almost always a shock and/or surprise. You see them on screen or on the internet and then there they are, right in front of you. It is a surreal experience. I got the chance to meet the members of the Counting Crows band, the great spiritual leader Shri Mataji Nirmala Devi, the inimitable percussionist Zakir Hussain, and more famous people. Each of these experiences were different and produced a myriad feelings in me.

When I was about fifteen years old, I got a VIP pass to a huge Counting Crows concert. The bassist was a family friend through a meditation group. The band was once on Rolling Stones magazine, and one of the most popular rock bands in the world. To get a VIP pass seemed to be something out of a dream. The ticket qualified me to meet all the members of the band backstage, to see the starting band, and to watch the whole process of setting up for the concert. The bassist Matt Malley is a kind man who is down to earth—probably due to his practice of meditation. I did not have so much anxiety while meeting him and getting to know him better, but the other band members were more reserved. They also seemed full of themselves. They smiled and made friendly gestures, but I felt like I was seen as lesser than them in their eyes. But anyways, watching the stage being set up and all the microphones being checked, I understood how much goes into putting on a stadium concert. It takes hours of preparation and dedication to produce quality sound. And right before the show started, I met the band called Live, who was starting for the Counting Crows. For some reason, I was shy when talking to them and only exchanged a few words with them. Once again, I felt the distance between me, a regular citizen, and these rock star.

In terms of a totally different experience, I met the spiritual leader and teacher Shri Mataji Nirmala Devi—Shri Mataji for short. The most memorable moment I had with her was having it being announced that she was coming to a meditation hall. I felt an immense amount of energy even before she came. This energy was like a cool breeze in my hands and above my head. As the time became closer and closer to her arrival, the breeze only increased. I realized it was her energy that I was feeling flowing through my body. It made me realize that one person could be so powerful in terms of how much he or she can give just by being present. It made me want to meditate much more seriously, to be able to give others the same energy on such a grand scale. The cool breeze made me feel peaceful inside and all my thoughts calmed down. I became completely satisfied and serene. As she finally came to the hall, my hands were overflowing with the energy she emitted. It reminded me of Star Wars, where the force is said to be everywhere and that masters of the force can control it. I may not have gotten spiritual enlightenment, but by just meeting Shri Mataji, I felt that I got a piece of it.

Turning from spirituality, now I will visit a brief memory of meeting an eminent musician that went differently than I thought it would. I have always enjoyed Zakir Hussain’s tabla playing (an Indian classical percussion instrument), but when I met him after a concert, for some reason, I tried to act uninterested. My tabla teacher requested for me to meet him in a big crowd of admirers. I respected my teacher so much and believed him to be the best tabla player that I feigned indifference in meeting the most popular tabla player in the world. He asked me, “How are you?” after we were introduced. And for some reason, I did not answer and looked into his eyes and we shared a moment of silence before the crowd once again took over the conversation. I was impressed that the first thing he would say to me was natural and a question about my well-being. It was a simple question, but it affected me. It taught me to think of others, even if I got famous.

Three experiences with famous people, and various results. From Matt Malley, I learned to be humble in fame; from Shri Mataji, I learned to what extent a human being can influence people spiritually; from Zakir Hussain, I realized we should have our attention on others even when we are known worldwide. I also learned that famous people are like you and me, but often with the world on their shoulders.