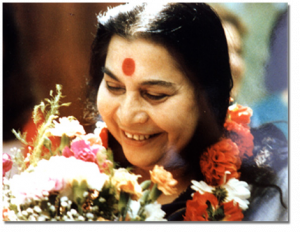 When I was about 13 years old, I visited an airport in Vancouver, Canada, to see a great holy personality: Shri Mataji Nirmala Devi. She was the founder of Sahaja Yoga Meditation—a worldwide movement of spiritual practices that continues to this day. My mother was and still is a follower of hers and I was merely interested and tagging along. It turned out to be one of my most memorable experiences.

Getting to the airport, I was nervous for some reason. I never saw Shri Mataji in person, and she was and still is highly revered in India and abroad. So, it was a bit like seeing a celebrity for the first time. There was a large crowd at the entry gate where she was supposed to come out. Word usually spread about where she was travelling and her followers would come to each airport to go to greet her into a new country or city. Commonly, people would enjoy giving her flowers as she entered the airport, and she would talk to her disciples in the process.

In light of this, I was carrying a flower as well. As soon as it was announced that she was coming through the entry gate, my nervousness shot up. People began to get closer to the gate in an almost half circle. As Shri Mataji passed through the gate, people walked towards her in an unrushed way, and gave her flowers, one by one. Shri Mataji was giving short comments to each person like, “Thank you,” “Oh, such a nice fragrance,” and such. Sometimes, she would stall at one person and ask about his or her family or a meditation program he or she was conducting.

When it came to my turn to give a flower, I did not know what to do. My mother looked at me with kind eyes and prompted me to offer her a flower at her feet, as was the custom in Indian society to a guru or a person of significant stature. I do not remember what Shri Mataji told me and how she looked at me, but what has stayed strong in my memory is how I was smiling. I was smiling in such a way that I have never done. I felt so much joy and satisfaction that it is practically indescribable.

I was smiling so much that I even tried to stop smiling. For some reason, I could not stop my face from making an expression of happiness. It was like I had lost control over my facial movements, or that I could not edge my way out of how I was feeling. There seemed to be no stopping my joy.

The rest is a blur, but I do remember going to the house where Shri Mataji was staying. Even after the ecstatic experience at the airport, I was still too shy to be in her presence. So, I mostly watched her interactions with people from afar and did not try to get in a conversation with her. My mother, on the other hand, was comfortable speaking to her, and was even talking to her about the future health of my little adopted sister, who was born drug-affected. At that moment, I was watching this unfold from a glass screen door from the backyard. Reflecting upon this, I feel a bit of shame and disappointment that I did not have the courage to converse with this great person. In a way, I missed the chance of lifetime, as Shri Mataji became increasingly busy in the future—so, it became more and more difficult to find an opportunity to talk to her on a personal level.

Anyways, the joy and satisfaction I felt when I offered a flower to Shri Mataji’s feet is something I will never forget and still reminisce about at the age of 33. I think it is the fact that I felt a height of emotion and spiritual bliss that I never experienced before, and that it happened seemingly in an instant. When I meditate now each day, I try to achieve that same feeling and mood. Sometimes I can get glimpses of it spontaneously—but other times, I wish I could meet Shri Mataji again, though she has now passed away. To this day, I am amazed that just the presence of a person can uplift someone to such a consciousness.

A narrative essay is a form of academic writing that is built around a narration of a certain event or situation. It is a short form of a narrative novel. Its main objective is to tell a story that it is both engaging and interesting to the reader. A nar...
✕
Write with confidence at a college level