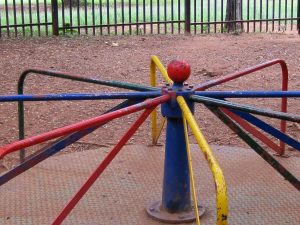 In elementary school, I had many experiences that garnered memories. I was often bullied on the playground during recess because of my skinniness and height. The larger boys saw me as a target for their ego to inflate. They might have had problems at home, or were bullied themselves, and were projecting their frustrations on me.

Anyways, after being locked in a locker, put headfirst into a toilet, punched and pushed around, called names, played jokes on, and other abuse, I finally had enough. I cracked. I could not psychologically take anymore hurt and punctures to my self-esteem.

A day or two after my birthday, I was on the school basketball court, shooting hoops. My mother had given me a basketball as a gift, and I was reveling in the fun of this new sport. But as expected (though I did not think about it at the time), another child started to bother me. He came up to me, and without a word, took the basketball out of my hands as I was dribbling. I was so shocked and emotionally tied to that gift that without a moment’s notice, I punched the kid in the face. I knocked him down and he immediately ran away crying. I never asked if he was playfully taking the ball from me, but I had had enough bullying in my day to react strongly to such an action.

Apparently, the boy went to the principal and reported my violence. I was called to the principal’s office during my next class, and walked in with my own form of ethics. The boy had been a bully, and he deserved a repercussion. However, the principal and I did not see eye to eye, naturally. He called my mother about the incident, and she was surprised that I would do such a thing. I had always been the quiet kid, playing with toys by himself, or tagging along with other children as more of a witness than a major participant. No one’s mother expects their child to punch someone, but it happens for certain reasons. In my case, I had been dominated by my classmates for years, and that pent-up anger and shame resulted in a violent action.

From then on, I figured out that I did not need to be bullied. I could take action. I found that my anger and resentment gave me a wild strength, which was unmatched by the usual fighting powers of a calm kid. In a way, I went to the dark side (in reference to Star Wars). I found a way to combat my enemies, but not in the healthiest of avenues.

In middle school, I dug my nails into a boy’s arm and restrained him after he made several verbal attacks towards me. He was much bigger and taller than me, but my anger guided me towards illogic and throwing estimating my chances to the wind.

In high school, a junior beat up my twin brother. My brother and I were both freshmen at the time. When I saw him next, I choked him and even dragged him up to a light post, where I banged his head on a metal pole. His girlfriend was watching and was terrified. I do not know exactly what I had come over me, but from that time in elementary school where I first used my fists to resolve an issue, I did not look back. I had found a solution that made me feel strong, confident, and able to take on the world. However, there was one problem: it put holes in my bedroom door, it led to unnecessary attacks on my family, and I found that the sensation of not being able to control my anger troubling.

Thank heavens I started to meditate. By the time I was 19 years old, bullies were not a problem anymore, and I had no use for my boiling anger. When I started to meditate every day, I found that the person beyond the anger was much more agreeable to be around. I wanted to be more like that person every day. So, I continued to meditate daily, and eventually I became the person that I wanted to be. I learned that anger was a temporary solution, but I did not need to drag it on throughout the years. Now, I am much more satisfied to be peaceful inside.