Trip to the End of the World 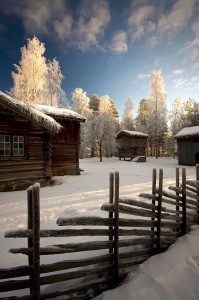 It could had been another drab winter. Every year, as soon as that particularly thick fog and white crisp snow covered the village of Ramsjö, its three hundred inhabitants would start spending their free time indoors, either sleeping or trying to wake up. This is what people commonly did in winter in Ramsjö—a small Swedish village located right in the middle of nowhere, on the shores of a beautiful lake that, unlike the inhabitants of Ramsjö, never froze even during the most severe winter seasons. Winter usually started early in this part of the country, and it meant that most life would hibernate almost completely for eight or nine months to come. The village folk were used to this kind of weather here. Everyone but Lara. She came to Ramsjö only three years ago, and she still had not forgotten what life was like outside this sleepy hollow den.

Lara came to Ramsjö to work at the local vineyard. She loved the work. She just was not into the whole Swedish moody, depressive climate and lifestyle. A native of Munich, Lara was used to having an active social life, a hundred and one acquaintances, and a wide variety of places to go out to in the evenings. Well, one facet of her life that she did not have problems with here was getting acquainted. It seemed that two months after Lara had arrived in the village, everyone already knew her, and some four months later, she already knew everyone here as well. “Everyone” was the three hundred and two inhabitants of Ramsjö, most of whom worked in the vineyards or the local forestry.

Lara’s first two winters in Ramsjö were scarily quiet and stress-free. It was not that she did not expect the place to be that way, but it seemed that she already had enough of the quietness and relaxation to start finding it rather depressive. She craved for sunny days, bright blue skies and smiley faces. That is why Lara long ago decided that this winter would be different from the previous two that she had spent here. Lara decided it would not hurt to travel around a little, the only problem being that she did not know what was there to see in wintry Sweden. But then it suddenly occurred to her that she was closer than ever to the fairy tale land that every child from anywhere in the world knows about—the Lapland. It was right there, a four-hour trip in her SUV and then another hour and a half on the local transport that looked like a combination of a caterpillar tractor and a land battleship. But, as frightening as it looked, it was the only way to travel around in the severe weather of the Scandinavian mountains.

When Lara finally got to the heart of Finnish Korvatunturi—the residence of Santa Claus—she was already tired and sleepy. It was probably due to the Swedish lifestyle of being careful and deliberate, but as soon as she came closer to a small village house that looked like a postcard picture, three cute toddlers dressed in green and with miniature bells sewed to their cones approached her. Two of them took Lara by each side and the third one pointed at the house, speaking some esoteric language and talking in a shrill voice, half-laughing and half-whispering. That is just as much as it took for Lara to start feeling like she was part of a fairy tale. Being a clear-eyed 27-year-old woman, she suddenly felt like a gullible little girl who woke up in a fantasy land. Lara followed the toddlers inside the house, and suddenly felt so warm, so comfortable, and so… at home. The toddlers pointed at an old brown arm chair by the fireplace, and ran away, leaving the sounds of their contagious, joyful laughter ringing in Lara’s ears. She hopped on the arm chair, tucked her legs underneath herself and stretched her arms towards the warmth of the fire. She did not even notice when an old man with a big white beard, dressed in red, quietly approached her by the side and gently put his right arm on her shoulder like a father would have to a daughter after coming back from a prolonged winter excursion.

“Well, hello there, dear. You have grown up so much since your last visit, my girl.”