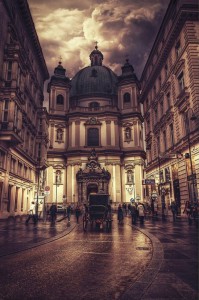 Olivia knew that visiting Vienna would do more than provide charm: she came to the City of Music to boost her knowledge in the German language and to behold the sights of Austrian art set in opulent galleries. Studying Austrian history and literature had been a longtime passion of hers, and when an opportunity appeared that would enable her to travel there, she did not have to think about whether to go or not to go. Her parents granted her a month-long vacation to the country of her choice as a high school graduation present. Without an instant of hesitation, she said, “Austria,” with a softly assured tremor.

She studied the German language for three weeks at the Heinzberg International Academy of Languages, while viewing art galleries and museums in the evening. But after her period of study, she had one week to indulge in full days of sightseeing. Her first response to being free from the Academy that evening was to sit in a cozy coffee-house and read a daily “Heute,” or news journal. She had been trudging through the happenings around town, when the sound of a cafe entrance door opening caught her attention: a miniature bell jangling with a tinny resonance. An elegant young man stepped in. He appeared to be around 23-25 years old and was wearing a blue polo shirt and tidy navy pants with grey suede shoes. He had a typical Austrian look—blond straight hair, cut short on the sides, blue eyes, and high cheekbones. He almost seemed plastic in his perfection, except the eyebrow ring, which gave his overall sophisticated and intelligent look a sparkle of rebelliousness, which made him even more sublime.

Olivia belonged to a family with a military tradition—her grandpa, her dad, and now her brother, all officers—so she had a conservative idea about the way a real man should look. And that image was not too different from the way the stranger presented himself—except of course for the pierced eyebrow. While she was examining him with obvious curiosity, Olivia did not even notice that his eyes were now chained to hers. She surfaced out of her half-dreaming state when she heard the stranger saying her name. First completely bewildered, Olivia realized she was still wearing the name-tag from her German-class.

He introduced himself as Mattias, a journalist who worked in the office of the paper Olivia was reading that moment. Sitting himself down at her table, they started talking and Olivia realized that three weeks in Austria was enough for her to start to conversing. They had much in common—a passion for classic literature, vintage rock music, abstract photography, and staying up late on summer nights. Though the evening drew in its darkness, she hardly noticed its fall. The night was comfortably warm—with a gentle, innocent smile, Mattias insisted that he should walk her to her hotel. While Olivia leisurely paced towards her destination with Mattias, she also began to smile in the same way.