Education as a Key Factor of Democratic Rule 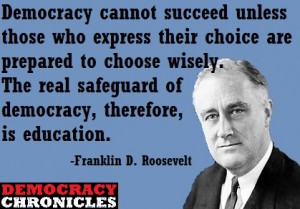 Modern people worship a number of idols: private property, freedom of choice, psychoanalysis, entertainment, the global economy, and many other domains of life. Perhaps the most powerful of these idols is democracy: a made-up god responsible for many war conflicts, ineffective governments, and the ignorance of common people. Though people worship democracy as a self-valuable phenomenon that can protect them from all evil exclusively, this form of government is useless without the efforts and responsibility of these same people.

Democracy is believed to be the best way for realizing human rights (Bohman 2007). Democracy is a form of government which implies that citizens are given the power to propose, develop, and create laws either directly or through representatives. Unfortunately, democracy can be fairly called an utopia suitable only for a perfect world that is make-believe. The former president Franklin D. Roosevelt once said, “Democracy cannot succeed unless those who express their choice are prepared to choose wisely. The real safeguard of democracy, therefore, is education.”

The total adult literacy rate around the world in 2010 was 84.1% (The World Bank Group 2013). This means about 785 million illiterate adults still can be found all over the world. Considering the words spoken by President John F. Kennedy, that in democracy, the ignorance of one voter impairs the security of all, imagine what the ignorance of 785 million voters could do. For instance, let us take a look at plebiscites. For example, it asks the voters only one question that can be answered only “yes” or “no”: “Does the country need a bicameral parliament?” Would all voters be aware of the possible consequences for the whole nation? What are the advantages and disadvantages of bicameral parliaments? How do they make decisions? Are they more effective and expensive than one-house parliaments? Only when every single voter is properly educated, democracy can succeed.

Most U.S. citizens consider dictatorship the only possible alternative to democracy. They push for democracy, as they believe all other options are worse. This is commonly not true—a society is not a rigid and conservative structure, unable to adapt to changes and find new ways of development; on the contrary, it is highly fluid and flexible, and forms of social organization that seemed impossible several decades ago are now the part of everyday reality. For example, one needs to look no further than the Arab Spring: a sequence of revolutionary transformations that had their origins in online social networks. What people need to understand is that voting, elections, freedom of speech, and other highly valued idols of every “democratic” societies are useless and even harmful if not used properly. Modern democracies sometimes look like ignorant crowds ruled by a minority, competent enough to make everyone believe it is the common people who run everything. Granting the educated representatives a right to rule is an act of idleness: people must become educated themselves, so they can be responsible for the life of their society and personal community.

The key to a rich, progressive country is not democracy by itself, but education. An ignorant crowd which has a right to choose from a number of options can inflict more damage to the state than a well-educated monarch or dictator. Only when people are totally prepared to be responsible for their actions, democracy will prove itself as the most efficient way of running a nation. Until then, it remains a false utopia.