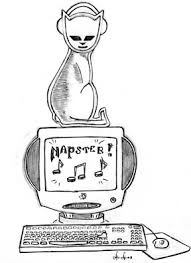 In the age of the Internet, protecting authorship and intellectual rights has become a real challenge. Numerous laws protecting intellectual rights imply only one way of protection: prohibiting any copying or usage without paying money for a digital product. Prices for digital products are often excessively high, and it encourages people to seek for free content and download it illegally. However, there is no real necessity to charge so much money for digital content, or sometimes even to pay for it at all.

One of the most famous rock bands in the world, Radiohead, had impressed their fans, critics, and the entertainment industry in 2007 with an unconventional step: they suggested that everyone could purchase their new album “In Rainbows” for as much as they could afford to pay, with the minimal price of 45 pennies (Telegraph). A free download of the album was also possible. Did the band suffer any financial inconvenience due to this act? Definitely not. On the contrary, due to such an extraordinary way of marketing, a significantly larger amount of people had purchased “In Rainbows” than was expected.

The famous band U2 in 2014 released an album titled “Songs of Innocence,” which was available for free download in iTunes. On their website, U2 posted a message explaining the rationale behind their decision: “People who haven’t heard our music, or weren’t remotely interested, might play us for the first time because we’re in their library. And for the people out there who have no interest in checking us out, look at it this way… the blood, sweat and tears of some Irish guys are in your junk mail.” Once again, the band did not suffer financial inconveniences (Pitchfork).

As for the popular claim that free downloading is stealing, it is not true. Theft means an illegal possession of a good that belongs to another person; as the result of theft, this person can not use this good anymore, and thus suffers moral and material damage. However, in the case of free downloading, the owner of a digital product (be it music, a movie, or photography) does not lose it; in a world with 7 billion people living in it (and growing), the owner will find a paying customer. It happens already; if it was not happening, retailers would have gone bankrupt several years after the Internet had been invented (FRI). Besides, people had been sharing content long before the Internet appeared, but according to the logic of copyright protectors, if I give my friend a book to read—for free—then my friend is a pirate, because he did not pay for this book, and its author suffers greatly. This is ridiculous.

The prices for digital products on the Internet are greatly overpriced; many artists such as Radiohead and U2 already allow their fans to purchase their music for the lowest possible prices, or to download it for free. Besides, free downloading is not theft, because retailers do not lose the goods they are selling, and there are paying customers willing to buy products. Therefore, copyright laws, as well as prices of digital products, should be revised.