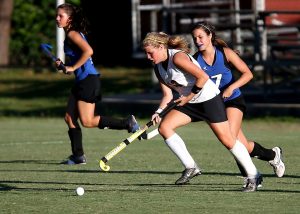 Though girls have been shown to drop out of sports more regularly than boys, this does not mean that the promotion and engagement of girls in sports is wrong, In fact, there are many good reasons why girls should participate in sports through their school years, and beyond. Girls who participate in sports have better physical health, mental health, teamwork skills, social circles, communication skills, and more.

Physical health is not only improved in boys when they participate in sports, but girls as well. Boys and girls are both human after all. In fact, according to The Huffington Post, “The Women’s Sports Foundation’s report “Her Life Depends On It III“ reviewed data from over 1,500 studies that demonstrate the importance of sport and physical activity for women and young girls. According to the report, staying active and participating in physical activity can prevent chronic diseases such as obesity and heart disease, lower rates of substance abuse, reduce risky behaviors, and decrease rates of teenage pregnancies” (Moses, Edwin). Most of this is common to boys as well, but decreasing rates of teenage pregnancy is vital. Too often, girls’ careers and lives in general are drastically changed by early pregnancies.

Physical health is valuable, obviously. However, mental health is just as vital, especially for teenagers. According to the website MomsTeam, “Girls playing sports have higher self-esteem and look to relationships with boys less to build self-esteem. Female athletes obsess less about their looks and whether they are attractive. Studies have consistently shown that girls who are physically active perceive their academic and athletic ability in a better light” (Lench, Brooke de). In addition, girls who play sports have been shown to have less an inclination towards suicide and depression in general. For girls, having balanced mental health is key to having a successful academic career.

Besides having fine physical and mental health, gaining teamwork skills is important. They often convert into a successful career. Stated by Forbes, “In 2002, a study by mutual fund company Oppenheimer revealed that a shocking 82% of women in executive-level jobs had played organized sports in middle, high or post-secondary school. Moreover, nearly half of women earning over $75,000 identified themselves as “athletic”’ (Goudreau, Jenna). This indicates that if you want a successful career as a woman, playing in team sports is a great foundation. Often what we do in our school years reflects our future path.

Having a great career is one thing, but having lasting friendships is another benefit of girls playing sports. With such an intense competition to be popular in school, friendships are valuable. According to Reachout.com, “With girls, participation in sport also broadens the social convoy to which young girls have access and strengthens relationships within groups. This increased sense of social connectedness is especially beneficial as it leads to social identification with a prosocial entity” (“The Role of Friends in Sports Participation”). These social activities dig many teenage girls out of depression and a lack of self-identity. Participating in sports allows girls to find their group, and to do collective activities together that are positive.

Though girls commonly communicate better than boys at early age, some girls feel shy in groups. Joining a sports team can help these introverted girls become more communicative. According to Play for Change, “Playing sport gives children the opportunity to share any problems they have. As they open up, they also learn to trust other people with important personal information. Doing this at an early age will encourage children to communicate more freely with others, setting a strong foundation for healthy personal relationships when they reach adulthood” (“The Relationship of It All: Playing Team Sport Can Enhance Relationship Skills”).

Girls leave sports teams more frequently than boys, but that does not mean they should not engage in sports. Girls who are a part of sports teams have increased physical health, mental well-being, teamwork skills, social activity, communication abilities, and more. Girls who engage in sports often have successful futures in terms of their careers and social lives.

“The Role of Friends in Sports Participation.” Suncorp, www.suncorp.com.au/learn-about/teamgirls/role-of-friends.html.

“The Relationship of It All: Playing Team Sport Can Enhance Relationship Skills.” Play For Change, www.playforchange.org/latest/2016/4/15/the-relationship-of-it-all.