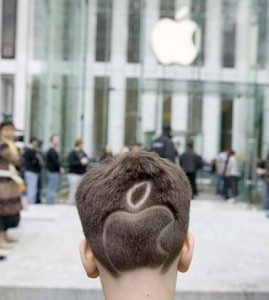 I believe we live in one of the most interesting and wonderful epochs in the history of humanity. People fly over the skies, communicate despite vast distances between them, browse the Internet for all kinds of data, treat serious diseases, explore the wonders of the Universe without even leaving our planet, and etc. Technology has become modern magic, and there is almost no field the human genius could not comprehend today. However, progress is a double-edged sword. Almost like magic that no common mortal had access to, technology today is also closed for the uninitiated. And, almost as magic and other mysterious specialties in ancient times, technology serves as a subject for cults and worshiping.

I have a number of acquaintances who are absolutely absorbed with the latest electronic gadgets; mostly this refers to smartphones and tablets produced by Apple. Steve Jobs is their guru, their spiritual leader; in the context of this essay, I would even say “a prophet.” Everything he said, they would believe. They would strive to purchase every new device Apple released; they kept an eye on the latest news about new gadgets being developed. One of my friends purchased the iPhone 4S. When iPhone 5 was released, he already could not eat or sleep normally until he borrowed money and bought this model. I am sure each half year, he will act the same. Almost like religious fanatics, these people do not tolerate any critics aimed at Apple or Steve Jobs, neither do they accept other products. It all looks at least strange for an outsider like me. So, I started to wonder about the nature of this adherence.

As it turned out, my associations with this cult were even closer to the truth than I could have anticipated. According to research conducted by the BBC, Apple products trigger reactions similar to religious beliefs in the brains of their customers (CNN). The MRI tests on Apple users showed that when their favorite gadgets were mentioned, brain areas responsible for religious feelings were most active. The same reactions were observed among the believers who were shown a deity’s image.

Having a dedication towards Apple products is characterized even by such attributions as pilgrimage. According to the blog Cult of Mac, an American citizen, Gary Allen, crossed 12 states to get to Apple’s first store, Tyson’s Corner, Washington D.C. (Cult of Mac). This act demonstrates all the signs of religious pilgrimage: it had a place of high significance as a destination; it was performed by a member of a group of people with certain values; it was dedicated to a memorable event—the chain’s 10th anniversary.

If you take a look at religious fanatics of any faith, you will see they are often extremely intolerant of the representatives of other faiths. While the majority of believers—for example, Christians and Muslims—easily tolerate each other and the cultural differences between them, fanatics strive to prove that their religion is better than others. Now, if you browse forums dedicated to the differences between iOS and Android, you will discover that “Holy War” is the best term to describe the discussions between the fans of these two platforms.

Technologies are becoming more and more advanced with each day. And though they have significantly improved our quality of life, they also possess certain dangers. One of them is an extreme dependence on (and devotion to) devices; in my opinion, this mostly refers to smartphones and tablets. According to recent research, mentioning the Apple corporation among its followers triggered those areas of their brains responsible for religious feelings. Technology cults can even demonstrate other signs of a religious cult—for example, pilgrimage, or a desire to prove the dominance of one vendor over another. The big question is how far will these Apple cultists go when humanity is even more dependent on Apple technology in the future?