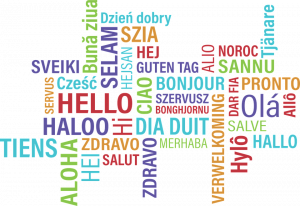 Learning a language is not a joke, especially a second or third one. I have had a rocky relationship with learning languages, starting from my native one: English. My second and third ones were Russian and Ukrainian. Russian sounded like an alien language to me and Ukrainian sounded like Slavic Italian. Either way, studying them has been a journey.

Most people who learn three languages to at least an intermediate level do not say they struggle with studying languages. But, that is my case. Even though I grew up in America, English was often most worst subject in school. My reading comprehension was bad, I had a speech impediment (though it has been resolved), and I was a late reader. It was not until my junior year of high school that I started to get decent grades in English classes. It was only through reading loads of books and writing tons of poems and stories that I finally began to grab hold of English, despite it being my native language. In other words, hard work and persistence were the only ingredients that solved my issue.

Next came Russian. I moved to Ukraine as an adventure and to live with my wife. It was difficult for her to move to the US, so I decided to relocate there instead. I came at a time when it was a blizzard, and that was a big shock to my system. I had been living in Seattle, Washington, were it hardly ever snowed. What was another surprise was learning the Russian language. My wife’s family is originally from Saint Petersburg, so naturally they spoke more Russian than Ukrainian. The first thought I had when studying Russian was that it sounded like an alien language to me. Even saying “hello” sounded strange and long. They say for the first year of studying a language, you are mostly listening and absorbing words, phrases, idioms, and the like. That is mostly my experience: I could barely put together a sentence after one year of listening to Russian every day and practicing a bit daily. I attended classes, but after only three months, I was not only discouraged with my progress, but I also did not want to bear anymore of the teacher’s yelling and intense homework. I was working full-time as an editor, and trying to finish my homework during my duties was too stressful. I had to remember whole pages of Russian text and recite it to my teacher. Although this method can be useful, it only made me want to study Russian less. Instead, I gave up these lessons and vied for more natural learning. I started to have long conversations with my mother-in-law and other people. I downloaded language-learning applications and the like to study on public transportation on my way to work. After five years of this, with some periods of leniency, I acquired a solid intermediate level in Russian, and could converse for long periods of time in Russian and understand about 80% of what people were saying around me. Like English, Russian took countless hours to become decent at. There was no trick or shortcut to become even adequate at it.

But eventually, I wanted to learn Ukrainian as well. I live in Ukraine for goodness’ sake. And, more importantly, in Kyiv, the city I reside in, people speak both Russian and Ukrainian. So, I was missing out on a large part of the culture. I soon found out that while Russian was interesting to me, I was passionate about learning Ukrainian. It sounds like Slavic Italian and has a much more pleasant culture attached to it, in my opinion. In fact, I got so enamored while studying Ukrainian that I forsake studying Russian simultaneously. I tried learning both at the same time, but my brain could not handle it. I felt like I was learning nothing in both. So, I have been sticking with Ukrainian for over two months now. Though I have noticed that after the second attempt, a third language is easier, the same problems arised for me: I was shy to speak the language, though I enjoyed reading, listening, and writing. As an editor, I feel the need to edit my speech as well. I always want to speak perfectly the first time. This is perhaps one of the biggest mistakes a language learner can make though. Perfection is the enemy of progress, they say. However, I have learned Ukrainian much faster than Russian due to my passion and interest in it.

Through learning three languages, I can say that hard work, persistence, passion, and allowing yourself to make mistakes are key elements of studying a language effectively.