What If Humans Became Robots? 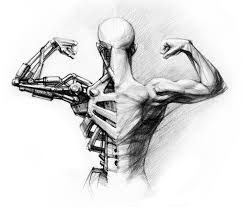 Recently, I have been researching this topic, and came across “H+ Magazine”. H+ stands for “humanity plus”—a result of an artificially-directed evolution. This idea is a banner of transhumanists—scientists, engineers, futurists, and enthusiasts of science, who believe that through merging with technologies, machines, and digital reality, humanity can deal with its futility, such as death and disease, and reach a new level of intellectual and physical capabilities. So far, transhumanism has not become the world’s dominating ideology, but if one day it will, the world would probably change dramatically, and along with positive effects there would also be hidden dangers of which humanity would become aware much later. One of the core ideas of transhumanism, and its most controversial goals—immortality—is one of such dangers.

Unlike alchemists of the past, who were looking for the philosophical stone or the youth elixir, transhumanists believe that immortality can be reached through technological progress: in particular, through uploading an individual’s consciousness into a mechanical body. At first glance, this seems to be equivalent to immortality: artificial bodies can be maintained, repaired, or changed forever. So, what is the problem with leaving our biological bodies and migrating to new horizons?

Leaving aside a trivial counter argument of transhumanism opponents, which sounds approximately like, “It would mean to stop being human,” I would say the most significant obstacle for doing so is the technology itself. Leaving a biological body would mean losing a solid part of what you do daily; in other words, you would lose your functionality. In particular, you would lose tactile and olfactory senses, or at least undergo a severe decrease of them. Sex, food, sleep, hugging, physical activities—all this would become pointless and/or impossible. I am not a neurologist or a psychiatrist, but I believe this would enlarge the risks of sensory deprivation and depression; a human brain might be replaced with an artificial construction, but psychological processes, according to transhumanists, would remain the same (Lifeboat Foundation).

The loss of our survival instinct is also possible: what would be the need to worry about our safety when possessing an immortal body, every part of which (including the brain) might be replaced if needed? Unlike many people might think, our survival instinct is not just about protecting one’s own life; or, to be exact, it does not manifest itself only in “fight or flight” situations. This instinct discourages you strongly from throwing yourself into all kinds of abuse, misbehavior, and danger; in other words, besides protecting your physical wellbeing, it also guards your personality and sanity. Together with this instinct, people might respectively lose their sexual drive and the fear of death—those motivators drive many people towards accomplishments, achievements, creative explorations, and discoveries.

It is natural for a human being to desire to leave his or her footprint in history. This is the only form of immortality we currently have, the only protection from the vast incomprehensible obscurity that is death. Creating immortal artificial bodies, thus providing humanity with literal immortality, might indeed solve the problem of physical death, diseases, disability, hunger, and many other maladies. But when it comes to the psyche, from my perspective, immortality does not seem to be a good solution.