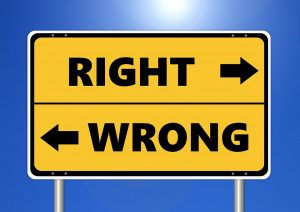 Upon reflection of the ideal social moral code, within one sentence, it would be: be constructive, not destructive. We have many holy books, manuals on living, and self-help tomes. However, I feel this is the most exacting moral code in terms of a social context. By social context, I mean how we interact with others and behave in social situations. Though “be constructive, not destructive” sounds sensible, there are many nuances. Sometimes it is difficult to determine if an act is exactly constructive or destructive. In the following paragraphs, these nuances will be discussed in detail.

We can decide if something is constructive or destructive based on degree, for instance. Say your toddler son is acting up and broke a glass vase, even after you told him to stop grabbing and playing with it several times. You get a thought in your mind to spank him to give a punishment for his naughty action. However, you start to feel confused about whether this would be constructive or destructive. It might show him that not listening to you and breaking fragile things is not welcome, but on the other hand, spanking him is an act of aggression that will hurt him physically and perhaps teach him to use force in situations later in life. There is no exact wrong or right in these moments. However, through your own reasoning, you can decide to what degree it would be beneficial or harmful to him and the situation at hand. Personally, I would not spank my son, as I think it does more destruction than construction. But, that is just me.

Another nuance to consider is the definition we give to construction and destruction. For example, for some people, construction can never involve violence, while for others, it could even be an integral part of the equation. Take the example of going back in time and killing Hitler. Killing someone is definitely termed a destructive act. However, in light of the circumstances, I would assume that the majority of people would agree that killing Hitler at the height of his power if they had the chance would be seen as a constructive, thus positive act. Therefore, our definitions often determine our values and how we behave upon those principles.

Additionally, construction and destruction can be filtered through a sociopoltical lens. Construction can be seen as good to some, and bad to others. Take for instance creating new homes in a forested area. Yes, homes for humans are made, but also the habitat for countless animals is being destroyed, or at least altered to an extreme. Construction, if it is true, it should be beneficial to all parties included. That is a tall order, though. Every step we take kills bacteria and other microorganisms—and perhaps plants, insects, and who knows what else. Destruction can be seen as a part of each moment. Plus, what a majority might perceive as a constructive might be seen as destructive to a minority. Is there a way to determine which side is correct? It is almost impossible. Being in the majority in terms of a moral outlook does not mean it is correct, or more appropriate. There have been many instances in history when acts were perceived as constructive, but were later seen as destructive with a modern lens. The Crusades, a series of religious wars between mainly Christians and Muslims, were seen historically in a favorable light in its time by Christians. However, in the latter half of the Crusades, sentiment about these holy wars were not cheerful among the Christian faithful. And if one talks about the present view on the Crusades, the majority of Christians will admit that it is a stain in their history books. So, often history is not kind to the perceptions we once held.