The Two Sides of Teamwork 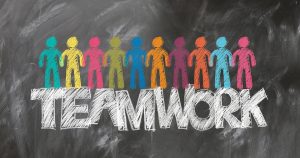 On one hand, teamwork is glorified, and on the other hand, it is dismissed as insignificant. I think that each issue calls for original thought concerning the effectiveness of solutions. Teamwork is commonly used to solve a certain task. The common saying is that, “two hands are better than one.” Though this may be true in the majority of cases, it seems there are circumstances when this statement is not factual.

For most of my life, teamwork has been essential in the activities I enjoy: football, soccer, hockey, chess, education, music, work, and more. Even if one is playing alone in a game such as chess, the teamwork between the pieces are key to gaining victory. When I was a tournament chess player, my main goal was for all my pieces to be working together—attacking, defending, and maneuvering along tactical and strategic lines that complement each other’s positions. When I was a soccer player, I felt that each position on the field was important. I loved to play defense to breakdown attackers coming to my side’s goal. The feeling of stopping an aggressive forward was lovely. However, it was the sentiment of being part of a team and contributing to a team in my own way that was the most satisfying. Even as a writer, I understand that having a community to lean on for feedback and encouragement aids me in keeping me busy with my poetry, stories, and essays. Most of my published work has been looked over by my peers, and there would have been tons of mistakes in my writing without their help.

And if we look at it globally, teamwork is the way to get things done. Companies work in team environments to complete projects. A police force has designated officers to cover different aspects of crime prevention. The examples can go on and on. The point is that the world runs within team environments in order to reach goals. Even different countries cooperate together to participate in war, trade, solving policy issues, and more.

All this pertains to the appreciation of extroversion as compared to introversion. In general, people are seen as strange if they do not enjoy interacting with others on projects, or if they do not like chit chatting. This is unfortunate, as every person is different, and should be allowed to choose whether or not he or she wants to communicate in this way without being given a stigma. For most of my teenage life, I was a shy, introverted individual. I would spend most of my days alone. I would play chess in my room, would make music in my room, would write in my room, and walk around alone for miles. Why was I like this? I think it was a combination of things: I did not have many friends, I liked my own space, I enjoyed trying to improve in something all the time, and I was depressed. I was viewed by most people I met as an odd person due to my lifestyle. But that was my personality—there was no reason to look down on me. I was not a criminal, and I was not doing harm to anymore. Because I was going against the grain, I was accused of being as an outsider.

Later in life, I became more extroverted. It was a natural process coming out of my depression. I got more friends, and started living in a communal environment. This reshaped my personality, and to this day, I would consider myself a balance between an introvert and an extrovert. That means sometimes I want to be involved in teamwork and sometimes I do not. Do you think anyone should be forced to be involved in teamwork? I do not think it is right. If you believe you will work better alone, or at least in a more peaceful atmosphere, then your boss, friend, or colleague should appreciate this fact.

Sometimes, teamwork makes the process of completing a project messy and lacking in quality. For instance, if a competent expert is paired with people that are not knowledgeable in a project, the assignment will become a difficult procedure. At times, it is better for one person to work on a task than a team of people, as some assignments can only be completed efficiently with extremely competent people.

Teamwork runs the world, supposedly. However, there are intervals when teamwork does not produce great results: when an individual is forced to be involved in a collective activity, and when a task is so specific that only a particular expert would be suited to finish the assignment. Being introverted most of my childhood, and an expert in creative writing, I understand that sometimes being alone is better than teamwork.