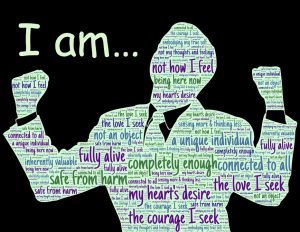 There are many ways to say who or what someone is. We can talk about their personality, identification, actions, and social network. We can also discuss the science and philosophy of what makes up an individual. We will consider all this in the following paragraphs as it pertains to the subject: myself.

Identification is another way people create an identity. They say, “I am an engineer,” and such. I mostly identify as a spiritual person and writer. However, I do my best not to be identified with anything. I believe this is the true way to be free.

“Actions are louder than words,” as the saying goes. And what do I do? Most of my days are spent going to work as a content coordinator at an IT company, writing poetry, playing percussion, singing sometimes, talking to friends and my wife, walking my dog, meditating, eating, and other mundane activities. But, I can hardly agree that my actions make up who I am.

My social network comprises of a few close friends, some friends I used to be close with, and many acquaintances due to my meditation practice, musical affiliations, and writing community. My net of close friends usually has about 2-3 people in it, which shifts based on the time period. I like to have a lot of friends, but at the same time, not really.

Now, let us dig more into the science of the self. On the most basic level, we are spaces filled with waves and particles—in fact, everything is (Orzel, Chad). A human being is made up of approximately seven billion billion billion atoms. Also, “Hydrogen, oxygen and carbon make up about 99% of the average human” (The Element Californium). According to Professor Shirley Hodgson of the Royal Society of Biology, “Importantly, all of these cells contain a lot of water, meaning that humans are in fact around 65 per cent water. The water in cells helps with chemical reactions, transports oxygen and waste, and acts as a shock absorber” (Johnston, Ian). In addition, we are hosts to untold amounts of bacteria. We have perhaps millions of bacteria in our gut alone, which act in a symbiotic relationship with us on good days (Johnston, Ian). So, undoubtedly, as a common homo sapien, this refers to me as well.

The philosophy of the self is even more daunting. To describe all the concepts of the self in the discipline of philosophy would take volumes. The ideas range from self-interest, the starting point of self-inquiry, an entity to be challenged, the witness of existence, the autonomy of a person, and a collection of occurrences and circumstances that shape an individual (Borghini, Andrea). My own definition of the self would be the observer of existence. Yes, I have a body, a mind, and emotions, but these are facets rather than essentials. As an observer, I watch these parts of myself—or if I am unfortunate, I identify with them.

Who or what I am can be looked at from so many angles that after a while, you almost have to give up on definitions and limits. Each person is a collection of definitions, and what is beyond those definitions—that is what it seems to be when you consider all the areas to comprehend an individual.

Johnston, Ian. “What Is the Human Body Made of?” The Independent, Independent Digital News and Media, 5 Aug. 2016, www.independent.co.uk/news/science/what-the-human-body-is-made-of-a7173301.html.

Borghini, Andrea. “The Self – Autonomous or Dependent?” ThoughtCo, ThoughtCo, www.thoughtco.com/all-about-the-self-2670638.