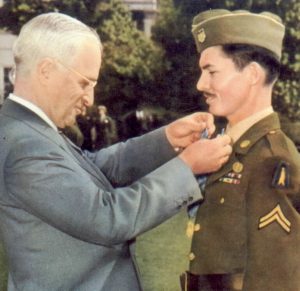 Hacksaw Ridge is a film directed by Mel Gibson and released in 2016. It is an action/adventure and drama film about an American army medic in World War II that saved 75 men without using a weapon. The following summary of the plot has spoilers, so it is advised that if you want to watch the film, it is best not to read this document now.

The film begins in the heart of war, with gruesome images abounding. The narration of Desmond T. Doss, the army medic, carries over these bloody scenes. He speaks about how God will love his children, despite them doing bad things. The scene ends with Desmond on a stretcher and a soldier consoling him.

The next scene is a flashback to 16 years ago. Desmond and his brother Hal are enjoying a day in the forest. They live with a housewife mother named Bertha and an alcoholic father named Tom, who was a veteran of World War I. Due to alcoholism and depression, the father beats his sons often. One day, the two boys fight in the backyard and Desmond hits his brother with a brick and knocks him unconscious. His father starts beating him with a belt, but his mother rescues him and tells Desmond that his brother will be okay.

Fast forward 15 years later, and Desmond is working in a church while his mother sings in the choir. There is a commotion outside, and Desmond finds and helps a boy who is hurt while working on a car get to a hospital. While at the hospital, Desmond notices a nurse named Dorothy and offers to give blood just to stay a longer time with her.

Afterwards, Desmond and Dorothy start dating, first attending a film. Desmond kisses her after he saves her from almost getting hit by a car, and she slaps him in reaction. However, she accepts his advances and walks more with him.

Next, Hal signs up for the army to fight in World War II to the displeasure of his parents. In the following scene, Desmond and Dorothy go on a hike and they seem to be falling in love with more kissing. Desmond tells her that he has enlisted in the army, and Dorothy is sad. In return, she asks if he will marry her, and he does not hesitate to propose to her at that moment. She accepts his proposal.

A short scene follows where Desmond is with his father in a graveyard, and his father speaks about how his two sons are going out to war and wonders whether he will see them again or end up just as another grave.

Desmond says his goodbyes, and is sent to training camp. However, his experience there soon turn hellish as he is ridiculed for not wanting to operate a rifle and to train on the Sabbath (Saturdays). Several soldiers gang up on him and beat him. Yet, when asked who were the individuals who hurt him, he does not give their names.

Though soldiers have been sent out in the field, he is not allowed to due to not passing rifle training. He is put in a cell for insubordination, and Dorothy visits him on their scheduled wedding day, and wonders if he is mixing up his personal will with the will of God.

Desmond goes on trail, and gets a letter from a general that used to be the captain of his father. The letter discusses how his belief in not using a weapon is allowed by the Constitution, and he is released. Shorty after, Desmond and Dorothy marry.

The next scene cuts to the 1945 Battle of Okinawa. They climb Hacksaw Ridge, covered with dead bodies to attack the Japanese. Desmond follows his fellow soldiers and takes care of each one he can with medicine and bringing them to a secure location.

That night, he stays in foxhole with a soldier named Smitty, and they talk about family life. Smitty apologizes about his previous ill behavior towards Desmond.

The following day, the Japanese unleash heavy artillery on Hacksaw Ridge and the Americans are forced to retreat. In the process of trying to save lives, Desmond vies to save Smitty, but he dies after being mortally wounded. After seeing his friend die, he saves many soldiers by bringing them safety and curing them, all through heavy fire from the Japanese.

Captain Glover commends Desmond on his heroism and apologizes for his words against him previously. He says they will not advance on the Sabbath day without Desmond, but Desmond agrees to anyways by first praying with the troops beforehand.

The crew run into a squad of Japanese soldiers that have misleadingly surrendered, and the two parties open fire. Desmond helps wounded soldiers get to safety and renders medical aid. However, soon enough, he is injured during the battle. A soldier grabs his bible and sends him off home.

The last scene of the film shows images of the real Desmond and states he received the Medal of Honor, and was married to Dorothy until her death.