Most Powerful Militaries in the World 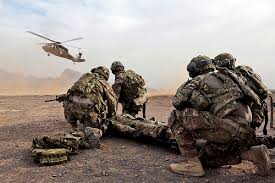 Military might is a common factor to consider on the political, social, and diplomatic stage. It determines much of policy and understanding the relations between countries. But how do we define military strength? The amount of weapons, weapon diversity, nuclear stockpiles, economic status, geographic factors, total available personnel, allies, and other factors are taken into account when assessing military power. With this in mind, in 2018, the top five countries in terms of military power based on the aforementioned aspects are the United States, Russia, China, India, and France, in sequence.

In 2018, the U.S. kept its number one spot, despite spreading itself a bit thin due to many campaigns. With a total personnel of 2,083,100, total aircraft strength at 13,362 units, 38,822 armored fighting vehicles, and total navel assets reaching 415 (and much more), the U.S. stands out as the most impressive military in the world. Another interesting aspect of the data is that the U.S. uses 19 million barrels of oil a day. This shows clearly how oil drives war and the economy in consequence (“2018 United States Military Strength”).

In second place, Russia had a strong year, in which it engaged in several high-profile programs to transform its worldwide image. With 3,586,128 personnel, Russia outmatches the U.S. in terms of staff. However, it has significantly less total aircraft strength, with 3,914 units. Though Russia has less armored fighting vehicles as compared to the U.S. (27,400), it has many more tanks than their rival (20,300). Historically, Russia has been enamored with the use of tanks, and it has been a symbol of the nation’s strength. So, it is no surprise that Russia has many more tanks. In terms of its navy, it is a close second with 352 naval assets. Russia and the U.S. have been rivals for decades, so it is not out of place for the two militaries to be first and second place in terms of power (“2018 Russia Military Strength”).

Another country with a huge land mass is China, and it has the third most powerful military in the world. In 2018, its military-industrial complex grew with its technological advancement and its military products being sold at greater rates. With its population of over one billion, it easily has 2,693,000 personnel. China also has a total of 3,035 aircraft units, an impressive 9,000 armored fighting vehicles, an amazing 714 naval assets, and much more. An alarming fact is that their oil usage is at an incredible 10,120,000 barrels per day. China’s military, like its economy, has a bright future, and might eventually overtake Russia and possibly the U.S. in military power in the next 50 years (“2018 China Military Strength”).

Despite India being deemed a third-world country by many specialists, it is a rapidly developing nation. In fact, it has the fourth most powerful military in the world, which is no small feat. It has a huge market for military goods, and also partakes in high-profile military campaigns. It has an astounding total military personnel of 4,207,250, with an aircraft strength of 2,185 units, 4,426 combat tanks, 295 naval assets, and a consumption of 3,510,000 barrels of oil daily. Like China, India is expected to grow greatly within 50 years in regard to military strength (“2018 India Military Strength”).

In fifth place, we have France. Its military status was mostly stable in 2018, with a continuation of military commitments. Though it only has a personnel count of 388,635, they have a total aircraft strength of 1,262, 6,330 armored fighting vehicles, 118 naval assets, and a defense budget of 40 billion dollars. It has many allies, especially being in the European Union. Its military might is not expected to grow much in the future, and might garner some losses if the European Union continues to deteriorate (“2018 France Military Strength”).

Military power in this modern age is as important as ever. Having a strong military determines your political, social, and diplomatic situation. In terms of the most powerful militaries in the world, according to an aggregate of factors, the United States, Russia, China, India, and France have the most military might in the world.

Research papers are pieces of writing longer than regular essays that require additional research in order to write them. Creating a research paper, in addition to the a...