Felons Should Not Be Allowed to Vote

Felons Should Not Be Allowed to Vote. At Issue: Are American Elections Fair? Stuart A. Kallen. Detroit: Greenhaven Press, 2006.

The article Felons Should Not Be Allowed to Vote argues that former felons should not have their voting rights restored once they regain their freedom. The author believes felons need to be deprived of their voting rights for life as a symbolic price they have to pay for violating certain social and legal norms. The article is structured in an unusual and, in my opinion, an effective manner. It first presents the arguments of those supporting the idea of re-enfranchising felons, and then provides the author’s reasons not to agree with the idea. 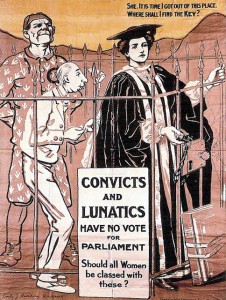 The first part of the article mainly focuses on the idea that the question of whether or not to renew one’s right to vote is strictly political: if felons cannot vote, then voting is no longer representative. In states like Florida, numerous districts with high crime rates would have practically lost their voting power since so many of its citizens have been disenfranchised. Such districts are likely to be populated by a particular ethnic or racial group that has higher crime rates, and therefore, this group would no longer be able to vote for the candidate they would otherwise have supported. Depriving felons of the right to vote for a lifetime means we would no longer have a fair representation of voters of different ethnic groups. This, on the other hand, may directly affect which candidate ultimately gets elected, and later on, what kind of executive decisions might be taken in favor of, or against, certain groups of voters.

However, the author of the article disagrees with this opinion by arguing that there are many other victimized and deprived groups that deserve more attention in advocating their rights than ex-felons. The author claims that if a certain person went on to disobey the law and the social values society generally accepts, he or she deserves never to have the right to vote restored since he or she is not that conscious a citizen in the first place. The author calls this denial of felons’ franchise for life a “debt” they have to pay back to society for harming one, or more, of its members.

I believe the topic being discussed is arguable, and just like how people cannot agree on whether or not the death penalty should be completely abolished, people are likely to disagree about the re-enfranchisement of felons as well. I believe what is important here is to stress that not all people who have ever been convicted of a crime should be treated in the same manner. I think we all will agree that murder, bank robbery, rape, and blackmail are crimes of different categories. In the same way, we do not sentence all felons to the same punishment, we should not talk about all felons as if they are the same. I strongly believe people deserve forgiveness, at least most of them do. While some will argue the right to vote is not quite that important in life, I think it can be a significant symbol of trust. If we trust someone enough to participate in the life of community, we will likely empower that person to justify our trust with their future behavior. At least I hope it is true for most cases.

I would disagree with the author of the article in that I believe that with the exception of felons who committed particularly serious or violent crimes, the majority of those who regain freedom also need to regain the ability to make responsible choices with the rest of the community, and that includes having the right to vote. Otherwise, if we keep reminding ex-felons of their former mistakes, they will never feel like they belong in the community and will forever remain deviants in the eyes of our society, and behave likewise too.