A perfect engine, a human soldier, a “kind of nothing.” Coriolanus is a steaming cauldron of a role, a man as hot in war as he is cold in heart. When Olivier played this Roman general, he was described as “a pillar of fire on a plinth of marble.” Now it is Tom Hiddleston’s turn and, whilst this is a magnetic and supremely considered performance, it is not the red raw guts of a role I was hoping for. 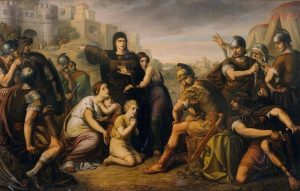 Josie Rourke has stripped the show right down and transformed an exceptionally epic Shakespeare play (battles bleed into battles that hemorrhage into wars) into a chamber piece. The cast has been cut down to only thirteen actors and a little boy. Lucy Osbourne’s set is spare and thickened up by of a series of projections on the back wall, which is alternately filled with graffiti, scrawled battle cries, warriors’ names, and the looming gates of an enemy city.

The battles, too, are notably restrained. Most of the fighting is depicted with the help of just a few chairs, which are used as shields and to shift the terrain. It is a clever idea but it does not make the blood boil. They are thoughtful battles rather than painful ones. Even the great “shower” scene that all the critics have pounced upon—in which Hiddleston’s Coriolanus gasps in pain as he washes his blood-soaked body—feels too soft. Coriolanus has just one, beautiful ugly scar that crawls over his shoulder. Otherwise, he looks in perfectly good nick. At one point, Hiddleston shakes his hair and great pellets of red water scatter around him and the ghost of a L’Oreal advert rises up.

Scenes that should feel dangerous come across as funny or even harmless. This is not to take away from Hiddleston. He is a hugely talented actor, who can imprison the audience with just one confessional glace. But I never felt him roar. This is largely down to the still atmosphere that “engulfs” Coriolanus. Rourke blasts loud music and spiraling projections into the scene changes but, for the most part, the scenes proper are quiet and still. When Coriolanus speaks with the plebeians in the Market Place, he stands at a lectern and addresses a nearly-mute audience. When Brutus (Eliot Levey on strong snaky form) chucks the plebeian’s “voices” or voting forms over Coriolanus’ head, Hiddleston merely pats him. No one seems particularly afraid of Coriolanus. Where is the man who makes his “enemies shake, as if the world were feverous and did tremble”?

In fact, Coriolanus projects such a questionable energy that his enemy—the Volscian General Aufidius (Hadley Fraser)—really just wants to rough and tumble with him. Having been banished by his own people, Coriolanus seeks out his long-term foe, Aufidius. Their strange union is one of the most unsettling Shakespearean scenes I have ever read. Of course it tingles with sexual tension (“Let me twine/Mine arms about that body, where against/My grained ash an hundred times hath broke”) but it is also edgy and frightening. This is two great warriors meeting and “feeling” each other out! But Fraser plays Aufidius as a plain-speaking North country chap; a simple lad who has nursed a huge crush on Coriolanus for a very long time. This “union” between Aufidius and Coriolanus makes the audience giggle when we should have our breath held, waiting for the first dagger to be drawn.

The only time this production really bleeds is in the final act, when Coriolanus’ mother—Volumnia (Deborah Findlay)—begs Coriolanus to return to Rome, to save his country, his reputation, and his soul. When Findlay, so fierce and resolved, drops down on her knees to implore her son, it as if the world has flipped on its head. Findlay turns in the type of performance that makes you long for her to catch your eye, just so you can shudder. This is her tragedy. When she falls down on her knees, it is this fall from grace that is the impossible reversal—the tragic flaw—that sets the final act scrambling to its bloody conclusion.

This article has been provided with a Creative Commons License, with a few edits: https://creativecommons.org/licenses/by/1.0/

Why would someone need to write a review for a theatrical play? First of all, to inform the potential audience about what they are going to pay money for; whether a play does or does not contain controversial scenes; whether it is worth attending, at least...
✕
Write with confidence at a college level