Magic as Love and Faith: Shakespeare’s “The Tempest” 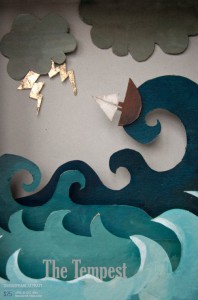 The Tempest is among the last and finest romances of Shakespeare, belonging to the Elizabethan genre of romance plays. The Tempest entails a combination of ironic comedy and tragedy, posing questions that are deep and those that cannot be resolved in the end. The Tempest is William Shakespeare’s last work—a play that bids him farewell on stage. Even though it is hard to generalize all the philosophical issues raised by the author under one specific theme, this play perhaps centers upon a crisis of faith more than upon any other issue. When faith is lost in humans, it is then paralleled by the inability to love and be happy in love.

The Tempest has experiments that develop a genre of tragicomedy, enclosing the perspective of the tragedies in a frame of reference that is broader, enabling people to acknowledge consequences that come along with the evils of humans, while it still emphasizes that those consequences are not ultimate. The characters of this play present a suffering that is genuine, but the emphasis comes to be in the restoration process, and not the time for destruction. Whereas the play does not allow the audience to forget the destructive and the bestial dimensions of human nature, it reminds them forcefully of the capacity of love and faith.

Shakespeare’s aim in the play is not to discredit Miranda’s assessment of humankind. Rather, her faith does not have to be destroyed, but qualified. Her innocence and trust are probably also to be considered as compulsory components of the genuine charity that presents its power of transformation in the play. Miranda’s kind of innocence can be destroyed by experience, but in a mature form, it can be restored as well, just like Prospero’s trial, which restores his ability to love and trust, enabling him to forgive his enemies. The difference between their faith however, is that Prospero is conscious of the tragedy of what can become of human beings.

This play, being the most fully-realized romance, focuses on the magus figure, an expression that is developed with hopes for humankind’s development of spiritual, intellectual, and developmental potential. Through the many years of contemplation of his experience, Prospero brings out his soul in harmony with the cosmic order. This magical happening brings out the union that is harmonious between the supernatural and natural dimensions of reality, which becomes symbolized by the marriage of heaven and Earth. When Prospero is forced to half his spirit performance so as to deal with Caliban’s plot, it shows that there are evil dimensions in the nature of humans that cannot be eliminated entirely. The vision of the magician in a universal harmony is not realized perfectly in the world.

Magic in The Tempest, is elaborated on several dimensions, including in the portrait of Prospero. Through this portrait, Shakespeare tells of the beliefs of magic that are deeply rooted in the world’s communities. Further, Shakespeare confirms that this belief can act as a vehicle of celestial power, as well as the essentials that come along with visionary imagination. From this, we learn of a particular concept that Shakespeare attempts to put across: that human nature is a rather conservative one. This has an implication that no person is capable of leading a sole life of mind, thus escaping the drawbacks that are attributed to our physical nature.

In The Tempest, Shakespeare ascertains that there is no way that human beings will escape the aspect of physical nature, yet claim to be fulfilled. Rather, Shakespeare says that human beings can claim to be fulfilled when they learn to harmonize the body and the soul. From this context, it is quite imperative to note that Prospero is a mortal being just like any other individual. This means that he must struggle to uphold the level of self-mastery he has attained. It is a bit difficult to come to terms with the fact that it is through Prospero’s personality that he is in a position to confer the magical powers that we find in him. Prospero has moved his faculty of magical powers to another power, by learning how to command the forces surrounding nature.

As much as the plot of The Tempest entails Prospero’s magic, there is the presence of other performances in the play that enables the characters to interpret their transgressions. An example of this is the feast that was broken which symbolized Alonso’s, Sebastian’s, and Antonio’s communion from exile. This kind of spectacle is not entirely to torment Prospero’s enemies, but to educate them on the knowledge of self, as well as evoke repentance. In the case of Alonso, the desired effect is clearly stated:

“O, it is monstrous! Monstrous!

Me thought the billows spoke, and told me of it;

The winds did sing it to me, and the thunder,

That deep and dreadful organ-pipe, pronounc’d

The name of Prosper; it did base my trespass (Shakespeare, p. 95).

The moment when Alonso felt remorseful, there is a change in his perception about the events. He imagines that the sounds that are discordant in The Tempest are transformed miraculously into music. A song that seems mysterious is the storm which whispers to him a secret of his soul.

Prospero uses tricks and magic to bring out effects that are special in theater, and eventually persuades the audience, as well as other characters that he is right in his case. He gets to forgive his enemies, the slaves are released, and gives up on his magic power such that when the play ends, he is seen as an old man who had been responsible for the pleasure of the audience. His magic teaches the audience a better sense of self, the acceptance of the world, as well as forgiveness in the interest of the human community.

Not only does this play suggest elements that are subjective in people’s perception of the world, but also endeavors to persuade us that various interpretations about life are more valid than others. This means that some events that could be regarded as miraculous or impossible to some people, may be proven true literally. As the broken feast drama had revealed the meaning of past events on Alonso’s life, The Tempest’s art intends to help the audience see beyond the level of events in earthly history, and apprehend their importance.

The Tempest is a play that is triumphant: the triumph of evil over the wise, of better over worse, life over death, present strife over future peace, as well as of virtue over vengeance. It is a play that comprises more of findings rather than the losses. For instance, Ariel found his freedom, Ferdinand finds Miranda, Prospero finds a way that takes him to his dukedom, to mention but a few. It is by being a master that Prospero reveals what each character requires to learn. In this play, magic that is benevolent perfects and fulfills processes that are natural. On the other hand, magic that is evil endeavors to pervert or destroy them. Prospero presents nature in conformity with rational planes of reality, and renews bonds that unite humanity.

Why would someone need to write a review for a theatrical play? First of all, to inform the potential audience about what they are going to pay money for; whether a play does or does not contain controversial scenes; whether it is worth attending, at least...