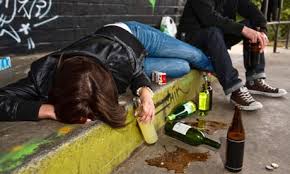 It is a pleasure for me to present a speech in this hall, as I know you all lead a healthy lifestyle and voluntarily participate in many kinds of activities aimed at propagating healthy habits and lifestyles; and thus it was you—perhaps, not in person—who helped me overcome my addictions and change my life. For me, smoking tobacco was my blessing and my curse. It was slowly killing me, but at the same time, I could not imagine my life without cigarettes, which provided me with illusionary support and stimulation. However, due to the motivation led by your organization, I found myself capable of revising my attitude towards smoking and my life priorities, and as a result, in October it will be my fifth anniversary of being a non-smoker. Thank you my friends!

Once again emphasizing the incredibly important work you are all doing, I would like to point your attention to another serious obstacle, which our (and not just our) society suffers from, and which is worth the attention of your organization. What I am talking about is alcohol consumption. Whereas smoking is gradually becoming less popular, alcohol remains an issue. According to data from the American Centers for Disease Control and Prevention, approximately 51.5% of the adult U.S. population can be considered regular drinkers, and 13.6% of adults can be said to drink infrequently. This gives us a sum of 65.1% of Americans who consume alcohol. Before you start asking me what makes me so concerned about it, let me introduce some facts about alcoholic drinks, as well as share some of my thoughts on this subject.

It’s not a secret that alcohol affects the human body in a negative way. This refers both to male and female bodies, though the effects may differ. Among the most obvious effects—even before liver cirrhosis—is its detrimental influence on birth rates and the nation’s health. You might want to ask me what made me say that. Let me explain. According to studies, drinking alcohol reduces the levels of testosterone in males, which has harmful effects on libido and sperm quality and quantity. Respectively, chances to conceive a child—or what is even more important, a healthy child—decrease dramatically. Not to mention the effects on men’s self-esteem and self-confidence. As for women, even minor portions of alcohol can cause severe problems with menstruation cycles, and chances of conceiving a child significantly drop. This is how alcohol becomes one of the factors that affect our population and birth rates, not to mention children born by parents who drink alcohol tend to be less healthy. Other negative consequences include diabetes, increased risks of breast cancer, pancreas and kidney dysfunctions and diseases, alcohol poisoning, and so on.

Another danger we know about, but often ignore, is alcoholism. Yes, many of us who consume alcohol believe they will never fall into this trap, and that there is a significant difference between them and real alcoholics. In my opinion, the difference is none. You may start by drinking one glass of whiskey on a Friday evening to relax after a hard week. But it’s a feeble motive. Who can guarantee your work won’t become more stressful? How do you know your life won’t become even more stressful tomorrow? According to such logic, you will have to drink more often. Gradually, you will find more and more reasons to drink, and will most likely forget the time you began drinking almost every evening—be it beer, wine, or whiskey—it doesn’t matter. And what matters is this is a direct road to alcoholism—maybe not in its extreme form, but these are just details. Perhaps, you even happened to say something like: “I could kill for a bottle of ice-cold beer.” Just remember that high chances exist that once you will say “a bottle of scotch” instead “a bottle of beer.”

The final risk I want to list may not be obvious, but this is exactly what makes it dangerous. I am talking about advertising and cultivating alcohol brands. Jack Daniels, Don Perignon, Captain Morgan, Bailey’s, Beefeater, and other famous brands tell their consumers certain stories of charm and prestige, which they gladly buy. We are fed associations that successful people drink this, and famous people drink that. Businessmen should drink whiskey, celebrities should drink champagne, a simple honest toiler should drink beer while watching baseball. This scotch will calm you down, and that shot of vodka with juice will grant you self-confidence to go get acquainted with a beautiful woman at a party. But these are lies! You don’t need alcohol for any of that. And think about this from another perspective: if we, experienced adults, get on this hook, how can our children, kids and teenagers, distinguish right from wrong?

I am almost at the end of my small speech, ladies and gentlemen. I only would like to emphasize the scale of which alcohol is a problem in America once again. What makes me so concerned is that alcohol, to my mind, negatively impacts birth rates and the nation’s health, makes one vulnerable to addiction, and helps corporations brainwash you and your children to make you believe you need to drink. I would like to call all you who are present here to think about this problem—perhaps even to revise your attitude towards it, and come up with ideas for solving this problem.

Thank you for your attention!