Humanity is Not Alone in the Universe 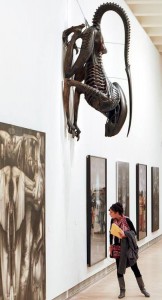 I am glad to see you all here, at the 14th Annual Conference of Independent Ufologists. You must have noticed that this year, we have a surprisingly significant amount of media representatives present at our event—probably in connection to the mission of the “Curiosity Mars” rover. Indeed, sending such a sophisticated scientific aggregate to the Red Planet gives us hope to learn more about its mysteries—in particular, about the lifeforms that inhabit it. We are glad to learn any new facts and information about extraterrestrial life, and at the same time many of us share one dream: to encounter life that would be necessarily intelligent outside the realm of our planet. As we all believe this is more than possible, I would like to address our guests—and of course, members of the press—and emphasize certain points that make us confident in the existence of intelligent extraterrestrial life.

To start with, I would ask you to close your eyes, and for just one minute, try to imagine the distance between Earth and alpha Centauri—the star that is one of the closest to our planet. The distance between them is just a bit more than four light years. It does not seem to be too much, unless you learn one light year equals approximately 5.8 trillion miles; besides, alpha Centauri is located in our galaxy. Now, please try to imagine the scales of the Milky Way, and then consider that the known Universe contains 50 billion galaxies. No matter whether you are a creationist or an evolutionist, considering these scales, do you really think one tiny planet on the outskirts of the endless Universe is the only inhabited world? I do not think either God nor evolution would be so inefficient.

The official position of the Catholic Church, spoken out in 2008 by the Jesuit director of the Vatican Observatory, Reverend Jose Gabriel Funes, says believing in alien lifeforms does not contradict faith in God, as if aliens really exist, they would still be God’s creatures. Whew, now, I feel better (laughter in audience). I would ask you to pay attention to the Bible and religious art. One of the most curious chapters in the Old Testament, in our context, is the first chapter of the Book of Ezekiel; Ezekiel gave a detailed description of inhuman creatures coming out from “a great cloud with raging fire engulfing itself.” I believe you will yourself find many other exciting details in this chapter; I will just add that it’s not the only the Bible which contains similar descriptions. As for art, take a good look at such paintings as “The Madonna with Saint Giovannino” by Domenico Ghirlandaio; “The Crucifixion,” created in 1350 by an unknown artist and stored in Visoki Decani, Kosovo; or at “Baptism of Christ” by Aert de Gelder. Just keep in mind that those artists lived long before the modern epoch of technological progress.

At last, I would like to remind you of several famous incidents, such as the Roswell incident that occurred in 1947, and the WOW signal captured in 1977 in Ohio. Particularly, the Big Ear telescope of the Ohio State University picked up an unusual signal coming from a seemingly empty point in the Sagittarius constellation. It lasted for 37 seconds, and possessed all the characteristics of an interstellar broadcast. Though numerous debates were held on this subject, the conclusion that had the most evidence for it claimed the signal had extraterrestrial origins.

These were just a few strokes in a vast canvas of facts, theories, and evidence, proving the existence of extraterrestrial life. And though our opponents possess equally strong arguments in favor of their claim that humanity is alone in the Universe, I am sure the endless space we live in cannot contain only one small spark of intelligent life, but on the contrary, I believe this spark came from a huge flame. For now, let me finish my opening remarks for our conference.

Thank you for your attention!