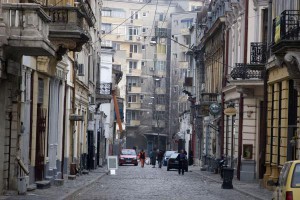 Everything went haywire for Johnny and his friends a little after 15 minutes from the time they stepped off the plane. At the airport lounge, Johnny took Big Jacob and went to buy a road map and some snacks, while Jill and Richie stayed with their carriage. When he returned with two plastic bags full of food and a detailed map without a single English word on it, he saw Jill all in tears, and Richie, who was standing with an extremely embarrassed expression on his face. As it turned out, Jill and Richie were approached by a group of motley vagabonds. In a couple of minutes, they begged about 50 dollars from Jill, stole 100 more from Richie’s hip pocket, and managed to grab one of their suitcases with them. All this time, both Richie and Jill were standing in one place and smiling absently. And when the friends appealed to a policeman, who was standing indifferently nearby, he shrugged and said in a coarse accent: “This is Romania. Relax.”

“What the hell did he mean by that phrase?” Jill resented as they were on their way to the hostel they booked in advance. “Don’t they prosecute crimes here?”

“I guess he wanted to say that such occasions with foreign tourists are so common that there is little chance to fix the situation,” Johnny’s replied just to say something. His attention was completely consumed by the scenes outside their taxi cab’s window.

“If reality can be like this,” he thought, “then I know nothing about life.”

As their cab was moving through the outskirts of Bucharest, he saw images a middle-class westerner could hardly imagine. A horse, harnessed to a cart made of a car body sawed in two; flimsy shacks studded with clusters of satellite dishes; a minibus refit as a sauna. In 20 minutes, he gathered enough material to write several chapters of the book he was working on.

When the four friends arrived at the hostel, it turned out that all rooms were already occupied, though after almost two hours of altercations, they checked in. However, the hostel administrator had to evict seven suspicious-looking guys who took the booked four-bed room; the rejects did not even show any signs of disappointment or surprise. Johnny felt like he was watching a conceptual modernist film.

Two days ago, they rented a car—an old Soviet rattletrap—to travel to northern Romania. They drove and chatted all way long; they felt cheerful, as their trip finally seemed to go as it should. They enjoyed mountain views, excitedly pointing at some remarkable or entertaining scenes, and shared impressions, until they discovered they were lost.

“But it’s impossible,” Richie said. “We were driving according to the map all the time!”

“So, where the heck are we?” Richie nervously unfolded the map and tried to identify their location once again.

“Man, remember what that cop said? Relax, it’s Romania! What else do you need to know?” Big Jacob did not seem to be disappointed. He had a knack for staying relaxed no matter how difficult the situation was. He smiled beneath his beard and bit into a hefty chunk of a sandwich.

The next four hours they spent trying to figure out their whereabouts and understanding how to get to their destination point. They were heading to Suceava when they departed from Bucharest. An hour later, they drove through a place called Vatra Dornei, and sighed with relief—now they knew that they had drifted westwards, though they had no idea how it happened.

A novel is a work of narrative prose that tells a story of one or several characters; it can be either fictitious or based on real events. Though there is no magic formula to creat...
✕
Write with confidence at a college level