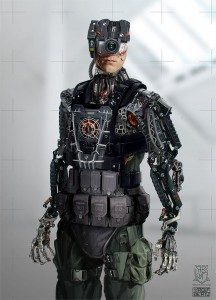 Jake woke up exactly at 6:30 a.m. from a pleasant melody playing in his head—yesterday he changed his alarm to a new one. His Organizer application stimulated his brain, and he felt cheerful and optimistic despite having two hours of sleep; Jake enjoyed this function, though the update cost was high. When he was on his way to the bathroom, today’s to-do list appeared in the corner of his field of vision, but he minimized it to spend a couple more minutes in calmness. Jake sighed and washed his face.

As his oven was cooking breakfast, Jake checked the morning news RSS channel. Nothing new. Riots continued—a bunch of idiots protesting against cybernetic enhancements. He scrolled down, though for a moment something seemed wrong about those riots. PharmaKorp denied accusations of experiments with organic computers. Android prostitutes were becoming more popular than real women—wives were in despair, the newspaper reported. The last blue whale’s signal was lost recently—scientists supposed the species had become completely extinct. Plague in one of the Moon colonies.

Just another day in this crazy world. Jake blinked his eyes hard and the Internet browser disappeared from his retina.

An indicator of an incoming message blipped in Jake’s FoV upper left corner.

“Okay, bring it on,” Jake said and sent a mental command to open the letter.

It was Mark, of course—who else would start working even before the working day began? Mark had sent him documents on the murder case Jake was working on: one jealous Italian guy uploaded a virus into his wife’s firmware after he had hacked her implant as she was sleeping and found a rather intimate video recording. Jake, the lawyer, had a couple of good ideas about what to base the defense on, and the prosecutor was known as a bit dimwitted, so he didn’t worry too much about the case. He hurriedly swallowed his breakfast of amalgamated nutritional matter and ran out of his flat.

On a bus, Jake kept thinking about defense strategies. He liked to use those new ultra-comfortable hover-buses instead of his car, because he could do some work on his way to the office without having to be distracted by driving. He dug into the materials and at first didn’t notice anything. But in a moment, he started to feel a bit dizzy, his left eye implant blinked a couple of times, and then white noise appeared. Such things happened sometimes during especially strong solar storms—something about electro-magnetic waves—so Jake didn’t pay attention. At the same moment, he heard cries from the back of the bus.

Feeling unusually nervous (“Should have installed the Antidepressant implant,” Jake thought) he turned around and saw that passengers were gathering around a man who was lying on the floor; his body jumped and shook as if he was electrocuted, and his irises were not visible—only white noise instead. Jake was shocked: he has never seen anything like that, even during the most severe solar storms. He approached the crowd intending to help several other men hold the body that was twisting in agony, but suddenly all of his graphic interface disappeared, and Jake felt the Internet connection, GPS, and GSM signals go out. His eye and brain implants shut down, and he felt terribly uncomfortable with his natural short-sighted eyes, not enhanced with cybernetics. His head was about to crack because of pain.

The bus driver dropped his head on the steering wheel; the bus lost control and crashed into a blank, plaster wall. Everyone fell on the floor, somebody yelled. Fortunately, no one was hurt seriously, except the man with the white noise in his eyes and the driver—they both did not move. Jake tried to stand up, but without his brain chip being operable, his movement seemed to be uncoordinated. He helped an older woman to get on her feet, and climbed out of the bus through a broken window.

Streets were in chaos. Jake could not see all the details because of his normal vision’s limitations, but he noticed multiple car crashes and people lying in convulsions. Not everybody was damaged to this extent—Jake saw men and women who tried to help each other and the poor fellows on the ground, but their gesticulations were as uncertain as Jake’s.

Finally Jake’s reserve systems renewed the power supply to his implants, and the first thing he did was open a browser.

“What the hell just happened?” he asked himself. This question hung in the air—everyone kept asking each other the same.

All people who were in the streets froze right where they stood: they were reading recent news. And the news was more than disturbing.

Jake’s confusion was growing with each article he read. Two questions disturbed him the most. What to do, and… If Humanity-1, the terrorism organization that agitated in favor of forbidding implants and returning to the solely biological existence, fiercely claimed its non-involvement, then who else could commit this assault?

A novel is a work of narrative prose that tells a story of one or several characters; it can be either fictitious or based on real events. Though there is no magic formula to creat...
✕
Write with confidence at a college level