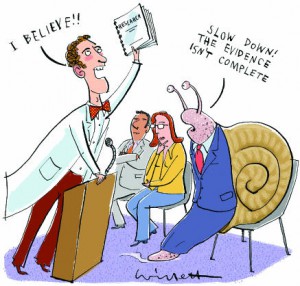 You will need supporting evidence to prove the data you introduce in your writing was not taken out of the blue, but was acquired as a result of thorough research, conducted either by you, or by other researchers. In other words, you need evidence to support the statements you make; also, you will need to cite your sources to prove the credibility of the data you use as supporting evidence.

* All the following information, data, and sources are made-up. Any coincidences are accidental.

– A lot of men use their free time to play video games or watch TV instead of spending time with their female counterparts.

– People who suffer from OCDs can be treated by making them refuse to act upon their rituals.

– Adults have a more developed instinct of self-preservation than teenagers and children.

– Women may efficiently deal with daily stresses with the help of shopping.

– According to research conducted by the AAOG, about 25% of men between the ages of 20-35 prefer to spend their free time playing video games or watching television. 36% of men, according to the same research study, still give preference to communication with their girlfriends or wives (AAOG website).

– During research conducted at Wisconsin State University in 2012-2014, psychologists came to the conclusion that people who suffer from light-to-average OCDs can be treated with exposing them to their fears, which cause the compulsive behaviors; as a result of prolonged regular exposures to consequential factors, compulsive rituals gradually decrease (Wisconsin State University website).

– Dr. Chelsey Livingston from BAAR states that children and teenagers seem to have less concerns about their lives and physical well being than adults; she believes it is connected to the ability to predict possible outcomes of one’s own actions, which adults usually possess to a greater extent than younger generations (BAAR website).

– “Happy Magazine” has conducted a poll, asking its audience (which is 97.3% female) to answer one question: How do they deal with stress? As a result, 64% of those who answered said that when they feel stress, they go shopping, and it helps them feel better (Happy Magazine).

– NUTSA scientists claim that, considering the current pace of technological development, by the year 2020, humanity will be able to start inhabiting the Moon (NUTSA Agency).