A Short History of Celebrity 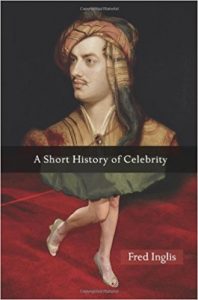 When you read tirades about today’s cult of celebrity, you can invariably expect two axioms to present themselves. One is that this development is lamentable and ghastly, symptomatic of an inane, dumbed-down culture. A celebrity now is someone famed not for necessarily having done something interesting or useful, but for merely having grabbed the public’s attention sufficiently. Secondly, it is invariably a given that the cult of celebrity is a relatively new phenomenon, an unintended consequence of modern technology such as mass print, television, and the internet, all of which have made it possible to imagine a stranger to be your friend.

Fred Inglis broadly agrees that our cult of celebrity is dismal, nurturing vacuous, vicarious, and malicious sensations. ‘Celebrity,’ he writes ‘is always an ambivalent designation, the feelings it engenders at once bilious and rapt, envious and dismissive’ (p157). The Janus-faced sentiments it cultivates are the logical result of its inauthentic nature, in that it leads us to confuse non-intimates with people we actually know. ‘The parallel orgy is one of sanctimonious fascination and distate’ (p253). His materialist explanation is that this parallel capacity to worship and detest celebrities satisfies a timeless human vice: envy. Modern technology has made it easier to be jealous of the riches of others.

Inglis disagrees, however, that the cult of celebrity is new. The author argues that as celebrity can only exist in an truly urban society, which, unlike a rural one, facilitates familiarity, we can trace it in some form back to the birth of the Modern itself—namely, the late-18th century.

Joshua Reynolds, he writes, was the first true celebrity, who reinvented the concept of a painter not as an industrious figure reliant on a patron, but who achieved notoriety as much for his sexual licence, gluttony, drunkenness, and gambling. Byron attained comparable infamy for his licentiousness, while Admiral Nelson’s dalliances with Lady Hamilton aroused as much prurient interest as did his naval triumphs. George IV’s fecklessness and disastrous marriage to Caroline of Brunswick were the source of much tittle-tattle and public disapproval. Long before Twitter made it possible to feign outrage about a public figure’s conduct or pronouncements, etchings by the likes of caricaturist and printmaker James Gillray permitted the public to pass collective judgment on the Prince Regent’s libertine behaviour.

In many respects, the 20th century saw an extension, not a revolution, in the way public figures were regarded. The likes of Jackson Pollock and Tracey Emin continued where Reynolds left off. After Byron has come a multitude of stars, from James Dean to Pete Doherty, whose embrace of the Dionysian has enthralled and appalled. Out of the lives of statesmen and politicians, narratives are still weaved and mythical figures created. The tragedy of John F Kennedy, and the Kennedy clan itself, is an obvious example. Nelson Mandela’s continued sainted status is another. Although ‘an inadequate economist and an ineffective policy maker’, the figure of Mandela, through his suffering, meekness, displays of forgiveness and reconciliation, has become, ‘as figureheads must, allegorical. His benign smile, his Hawaiian shirts, his informal readiness to cut a caper, take a turn on the drums, drink tea in the townships and entertain any and every passing dignitary come to pay homage, each aspect of the man captured and made real the celebrity peacemaker, gregarious and good-humoured’ (p274).

It could be argued, however, that the cult of celebrity predates Modernity (the epoch which the Enlightenment and the Industrial Revolution brought into being). For instance, the 1st century BC Roman orator Quintus Hortensius achieved not just recognition but celebrity on account of his talent as a wit and mime artist. Cicero was likewise renowned for his oratory skills. In Rubicon: The Triumph and Tragedy of the Roman Republic (2003), Tom Holland writes: ‘Like actors, orators were celebrities, gawped at and gossiped about. Hortensius himself was nicknamed “Dionysia”, after a famous dancing girl’. You don’t require an urbanised society for ‘celebrity’ to exist, and not even the technological mediums of print and screen. You just need a city that contains enough strangers to produce at least one figure everyone can talk about. ‘Celebrity’ is a requisite and consequence of large, non-intimate, imagined community.

Still, we may grumble, at least the likes Hortensius and Joshua Reynolds had palpable talent. Inglis echoes the familiar lament that today’s celebrities often do not. They are famous for being famous, as the cliché goes. The concept of fame has always been with us, but ‘celebrity has largely replaced the archaic concept of renown’ (p4). Fame used to be the reward of social achievement in the public field or the tribute paid to power, wealth, and privilege. ‘Celebrity, by contrast, is either won or conferred by the mere fact of a person being’s popularly acknowledge, familiarly recognised, attended to, selected as a topic of gossip, speculation, emulation, envy, groundless affection, or dislike’ (p57).

Fred Inglis, in blaming television, glossy magazines, and capitalism for leading us to this pitiful state of affairs, sounds like an old-fashioned socialist—the type who a few generations ago would have exhorted the working class to better themselves by reading classics from Everyman’s Library as opposed to penny dreadfuls. Indeed, he is, by his own admission, an unreconstructed Old Labourite. Not that there is anything wrong with this. Today’s widespread (and quintessentially New Labour) assumption that difficult literature or art is ‘elitist’, and therefore beyond the comprehension of the working class (who should stick to watching football and the telly), is a disgrace, and an unwitting form of inverted snobbery.

Yet, a failing of the Old Labour mentality was its distrust of aesthetics and its puritanical suspicion that art can serve as a social opiate. One of his main objections to celebrity magazines and reality television shows such as Big Brother is that they lead us to comprehend our emotions through the actions of others. But has not vicarious emotion always been intrinsic to the arts, and indeed the human condition? Would he similarly denounce those who shed a tear at the end of Casablanca (1942) or The Sound of Music (1965) for being ‘vacuous’? I suspect that had he lived in early-17th century England, Inglis would have bemoaned those transfixed by Shakespeare’s plays for being all silly. It is not real life, you know. It is only a play.

Of course I exaggerate, and for all its lapses into verbosity, modish po-mo italicisations and episodes of peculiar rhetorical flourishes (‘[Marilyn Monroe] served as a sex object… and therefore, to tens of thousands helpless wankers, as the magazine cover they kept handily to hand’), A Short History of Celebrity is a wonderfully curmudgeon work. Inglis’ reading—and viewing—is deep and wide, his prose rich and erudite without being forbiddingly esoteric. And unlike so many who excoriate our ‘dumbed down’ culture, at least he has examined it before doing so. Just as there is nothing wrong with the working class bettering themselves culturally, there is nothing wrong with hideously middle class people like myself reading OK! or watching The Jeremy Kyle Show. Indeed, if you seek to fully understand Western society today, I would say it is imperative.

Written under a Creative Commons License, with edits: https://creativecommons.org/licenses/by/1.0/