Consumerism: The Scourge of Modern Society 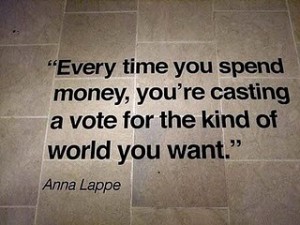 Residents of a prosperous country have to go no further than a supermarket to get all they need to live a sustainable life. This is undoubtedly a benefit of living in a capitalistic society; however, there is also a flip side to which many scientists and philosophers call attention. This is the ideology of consumerism, which is often embodied in a consumer’s urge to purchase goods in ever-greater amounts, even if those goods are not needed. Consumerism is supported by manufacturers who do their best to sell their products by encouraging people to buy more and more. An example of this is the smartphone market. According to Pulitzer-Prize-winning American author Anna Quindlen, “A person in the United States replaces a cell phone every 16 months, not because the cell phone is old, but because it is oldish” (2008, para. 6). As a result of this consumerism, the more people want and buy, the less they appreciate the value of their possessions.

One of the most powerful forces that contribute to the promotion of consumerism is the omnipresent advertising in capitalistic societies. Advertising is an essential component in the marketing strategy of any product, but at the same time, it affects the human mind. Advertisements portray products as necessary objects that are required to keep one’s social identity secure. Thus, they do not represent wants, but instead create a need for luxury goods. Numerous print and TV advertisements persuade potential customers that it is a Gucci bag, a Calvin Klein dress, or a pair of Jimmy Choo shoes that define their personality and character—not the personal traits they possess.

The youth are probably the most vulnerable target of advertisers. Grown-ups can often distinguish between what they need and do not need; however, young people tend to be less capable of critical thinking. Since their world is created by their aspirations to keep up with modern trends and acquire the most up-to-date gadgets, they are easier to manipulate (Schor, 2004, p.11). Quindlen (2008) provides a perfect example of this manipulation. She confesses that television advertising “made [her] want a Chatty Cathy doll so much as a kid that when [she] saw her under the tree [her] head almost exploded” (para. 3).

On the other hand, advertising is not the only phenomena responsible for the increasing numbers of people obsessed with the need to buy new items. Marketers have begun to compare consumers to roaches, “You spray them and spray them and they get immune after a while” (From Consumerism to Personal Bankruptcy, n.d., para. 10). This refers to how advertisements hardly have an effect on most people anymore. While advertisements are beguiling, if they were that effective, people would be rushing to stores to purchase the advertised products in higher numbers than already present.

Another reason why the idea of permanent acquisition of goods has become dominant in the minds of many people, both adults and adolescents, is the lack of skills necessary to maintain their own resources. Since they did not earn it themselves, the youth are often unaware of the value of money; they demand that their parents satisfy the desires instilled in them by advertising. According to a survey designed to measure children’s knowledge about financial management conducted in the United States by the charity organization Jump$tart Coalition, survey-takers scored an average of 52 percent. This percentage indicates a weak awareness of the usage of money (From Consumerism to Personal Bankruptcy, n.d., para. 16). Even adults would rather spend their disposable income on a new suit or an extravagant holiday than save it. On the other hand, many university and high school students take part-time jobs as graders or professors’ assistants not only to broaden their knowledge, but also to learn to use their hard-earned cash capably. Adults’ earnings have hit an all-time low due to the recession, and many of them are now trying to control their expenditure and pay off their debts. These factors weaken the indirect link between poor financial management and consumerism.

Also worth considering is the yearly reduction in the number of people who want to save their money for the future. If consumers do not save their money, they will obviously use it to buy innumerable useless goods, resulting in consumerism. An article published in the Christian Science Monitor asserts, “Americans’ personal savings fell to -0.5% last year, the first time since the Depression that the savings rate has been negative for a year… it reflects how irresistible consumerism has become in the American psyche” (para. 3).

Another significant factor that plays into consumerism is the way that people’s priorities have recently changed. In the past, consumers were unable to purchase luxuries just because they wanted them. Due to insufficient funds, they had to focus on their needs rather than their wants (From Consumerism to Personal Bankruptcy, n.d., para. 18). Necessity forced them to choose what they needed most; thus, they developed the skills necessary to sort their needs by order of importance. This prevented them from experiencing the additional stress connected with paying off loans and debts. Nowadays, the advent of credit facilities allow consumers to have an almost unlimited possibility for purchasing what they wanted but could not afford. Credit cards allow buyers to have the impression that they have inexhaustible financial resources. The only choice people have to make now is what they want to buy first. This creates the illusion that desirable products are easily accessible; the world is perceived as one gigantic mall. In addition, according to the article “Dhamma in the age of Globalization” (2008), an average modern individual “sees oneself as the center to judge the world, treating others as mere tools to satisfy one’s goals.” This attitude has led to shaping a consumerist attitude towards life with its dire consequences.

The spreading of the consumerist ideology is facilitated by a combination of different factors, among the most significant being an overexposure to advertising, a lack of skills to maintain financial resources, and a global shift in people’s values. Logically, it therefore seems there are at least two ways to prevent, or at least slow down, the further expansion of this thoughtless attitude to life, money, and goods: supplying financial education to explain to various age groups how to plan a budget more effectively—additionally, teaching them to examine the psychological motives of their uncontrolled desire for acquisition, to see what tricks manufacturers and advertisers use to catch their audience’s attention, and to recognize how they also manipulate consumer’s wishes and point of view. The benefits of a critical attitude toward saving more money, therefore reducing stress, should be emphasized. Teaching the youth the value of money, along with the skill to distinguish their needs from their wants, would also contribute to forming a healthy attitude towards goods. A world without consumerism is highly unlikely to occur in the near future, as it is too complex of a issue to eliminate entirely. However, the recession that erupted a few months ago has had a colossal impact on consumer spending. If this trend of reduced spending continues for the next several years, it might reverse consumerism’s materialistic illusion of life.

(2013). From Consumerism to Personal Bankruptcy: Its Causes & Its Consequences. Fong and Partners Inc.