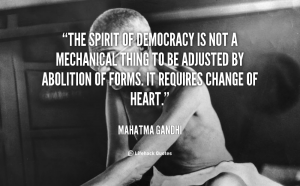 Sir Winston Churchill once said that democracy is the worst form of government, except for all the others that were tried in the past. Democracy has its definite flaws, but it may be better than the other governmental systems that exist. Though the perspective that democracy is a panacea that cures all political ills is false and critics accuse it of being overrated, it remains viable. It meets the aspirations of the people and provides an effective means of managing the state.

Democracy garners much support from the popular belief that an alternative regime is a dictatorship or a monarchy. While not all monarchies or dictatorships bring disaster to their subjects, the critics of democracy often elude that democracy results in the oppression of the minority by the majority. Critics also say that elections, especially in third world countries, are not conducted in a free and fair manner, and this is necessary criteria for a real democracy. However, the point about oppression by the majority is not always valid. The results of elections, and thus, the efficiency of the people’s declaration of political will, depend on various factors, such as the type of electoral system in place. A proportional electoral system is considered to be the most fair, since it covers the diversity of outlooks that exist in every society. Depending on local peculiarities, each country uses the most suitable type of electoral system: proportional, majority, or mixed. Besides, considering all points of view, it is impossible to please everyone; therefore, a compromise is needed. Democracy provides more possibilities for a consensus than any other political system. Thus, it is difficult to unequivocally claim that in democracy one group of people implicitly oppresses another.

Critics of democracy point to the economic success of authoritarian China, as opposed to the economic malaise currently faced by the democratic West. They connect economic success to the type of political regime, claiming that manual management of the economy, in various degrees, is typical for authoritarian countries and is more efficient than a free market economy. However, China’s progress is specifically caused by the liberalization of the market and the society. As China grows into an economic superpower, capable of rivaling the United States, its people aspire for greater political freedom, as shown by the more relaxed leadership style adopted by President Xi Jinping (The Straits Times, 2013). To ensure the People’s Republic of China continues developing successfully and that its current political and social foundation remains intact, the Chinese Communist Party needs further support of the people. This means the deepening of the democratization processes. Economic gains is difficult or impossible without loosening the reins; thus, democracy positively affects the state of the economy.

Critics of democracy also claim if a society values each individual’s outlook and point of view, conflicts are almost inevitable, since the diversity of interests and positions causes collisions. However, most democracies have a variety of safeguards against potential abuse, which protects the rights of their citizens and the basics of their systems of governing and managing the state. These safeguards include written constitutions, human rights legislation, judicial review of laws, etc. (Brittan, 2012). With these checks and balances, democracy provides a certain degree of protection to the masses. Democracy also has protection mechanisms for regulating the solely political spheres of life, saving them from misuse. For example, the U.S. electorate might well have voted to give both Ronald Reagan and Bill Clinton a third term, but the constitution forbade this as a protection against dictatorial aspirations and entrenchment of power.

Therefore, claiming democracy as overrated is not fair. Though this political system possesses a number of drawbacks, and is sometimes inefficient, it is still the most suitable form of government for most modern societies. Though some critics blame democracy in the oppression of the minority by the majority, in practice, a democratic process is a constant search of compromise that satisfies as many people as possible. Democracy is an important factor of economic efficiency, and a reliable mechanism of ensuring the rights of each individual, and a proper functioning of authorities and social institutions.