Facing the Modern: The Portrait in Vienna 1900, National Gallery, London

The popular image of Vienna at the beginning of the twentieth century is of a city of contrasts symbolized by the strutting Hapsburg monarchy on the one hand and Freud’s couch with its troubled patients on the other. But is that view correct? This exhibition is a chance to revisit some of that era’s art and see whether it confirms the standard view or gives us a new perspective on the social and political aspects of the period. 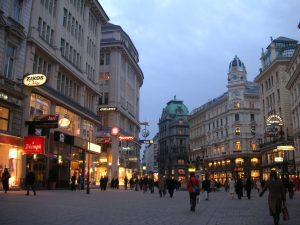 As a help towards this, we can reconsider the meaning of the exhibition’s title. According to the National Gallery’s publicity blurb, what makes the year 1900 important is because this was when Vienna’s modern artists rediscovered the works of painters like Friedrich von Amerling and Ferdinand Georg Waldmuller, the so-called Biedermeier period of clear and simple painting a time before the arrival of social changes which, by the end of the nineteenth century, were in full swing. But it might be interesting to think of 1900 in another way. The year 1867 had seen the establishment of the Austro-Hungarian Empire, and this had ushered-in a time of liberal and democratic reform, urban and economic renewal, and religious and ethnic tolerance. It was a period in which the Viennese middle class—including immigrants with Jewish roots or connections—flourished, but ended with the rise of nationalist and anti-Semitic movements. So, the first year of the twentieth century can be seen as a useful—if arbitrary—dividing point in this process. What paintings are outstanding in this exhibition, and do those from 1900 onward reflect the beginning a definite change in the system of values which predominated in the Empire during this period of churning cosmopolitan change?

Court painter Friedrich von Amerling’s “Portrait of Cacilie Freiin von Eskeles” (1832), shows her with an expression of regret passing across her face and is noteworthy in that her father had campaigned for full Jewish rights, a harbinger of changes to come. But traditional society seems to be holding its own with Gustav Klimt’s “Portrait of a Lady in Black” (about 1894) showing a side view of her and with a look of puzzled annoyance (over a social faux pas?) on her face. “Self Portrait” (1902) by Russian emigre painter and sculptor Teresa Feodorowna Ries, shows social change which has come to fruition—she looks down at us with confidence both as a woman and an artist.

The Impressionistic “Nude Self Portrait with Palette” (1908) by Richard Gerstl shows him with a mixed expression of uncertainty vying with a glimmer of impatient toughness. The artist’s painting of his brother, “Portrait of Lieutenant Alois Gerstl” (1907), shows this army officer with a face that mingles alertness and fear—an evocation of impending social change and its upheavals, or is the officer simply a conservative, or even a martinet, whose short fuse is in the process of being ignited by his brother’s “artiness?”

With the institution of the family, usually seen as a bellwether of society, we get mixed visual messages. “The Markt Family” (1907) by Alois Delug is a light-hearted work showing a happy mother with her children and a dog. By way of contrast, we get “Children playing” (1909) by Oskar Kokoschka, showing doll-like girls, sitting side by side, and whose wide-eyed stares give the impression that they are planning something nasty. In his “Portrait of Hans Tietze and Erica Tietze-Conrat” (1909), Kokoschka shows this couple, of Jewish extraction, with a semi-fearful alertness, as if sensing that their presence is tolerated, not welcomed. In Anton Kolig’s “Portrait of the Schaukal Family” (1911) we see its members reading and drawing, in other words, living as individuals. But we can read too much into this. Yes, we can take this picture as a metaphor for disintegration of family and social life, but we might also think that it simply shows a family whose members were, whilst united, also able to have individual interests. But by 1918, we have the despair-filled “The Family (Self Portrait)” (1918) by Egon Schiele, showing him and a model (his wife was dead by the time the picture was painted) with naked, sagging flesh, along with a child (who was added later to the scene).

The paintings in the concluding sections of the exhibition still see tradition and modernity running neck and neck as it were. Tradition continues to makes a stand with the “Posthumous Portrait of Empress Elisabeth” (1899) by Gyula Benczur, whilst “Count Verona” (1910) by Kokoschka, shows the Count suffering from tuberculosis (at that time an almost certain death sentence) with a skull-like head, a painting which would get the artist at least one critical lashing. Klimt’s “Ilia Munk on her Deathbed’ (1912) shows the daughter of one of Vienna’s leading Jewish families with her lips parted almost in serene pleasure. “Emperor Franz Joseph on his Deathbed” (1916) by Franz von Matsch shows the veteran statesman and political survivor at peace as if sleeping, the flowers near his body a contrast with the background plain walls (a feature which reminds us of how he combined his exalted status with frugality—the last emperor to exercise his right of veto at the outcome of a papal election, he slept on a hard army bed).

So, in one sense, this exhibition strengthens the standard image of the Austro-Hungarian Empire’s final decades. And this presents us with a conundrum, for the progressive works here attest to the freedom of thought and expression permitted to flourish in what might have been regarded as one of the last societies where such activities would have been allowed—a conservative Catholic state. And that makes us wonder how the two sets of values exemplified in these works as a whole—on one hand Imperial traditionalism, and on the other the beginnings of radical modernism in the arts and psychology—could coexist within the same society: were traditionalists too complacent or weak to combat these changes, or did those new ideas have only limited appeal and power, so enabling them to be accommodated within mainstream Austro-Hungarian society? Additionally, these exhibits point, in turn, to the wider conflict of values which was taking place not only within the capital of the Austro-Hungarian Empire, but throughout Western Europe before the First World War as traditional concepts were being challenged. But, in addition to historic interest, does this period have any significance for us now?

With any era it is easy—and tempting—to play the parallel period history game and search for similarities between it and today: the forthcoming commemorations of the First World War will doubtless usher-in an orgy of such activity. For both socio-political traditionalists and radicals alike, certainties of order or progress would be challenged and destroyed by that war, just as the hopeful expectations of the post-1945 era would be confronted by the fallout from the end of the Soviet system, globalism, the rise of radical Islam, and western financial collapse. Perhaps the only lesson we can draw from the differing ideals summoned-up in these portraits—and the conflict that would destroy or change those ideals—is that neither presumption nor despair have a place in historical expectation. Human beings—either singly or socially—cannot exist without beliefs, and hopes for their fulfillment, but as to their outcomes; at the risk of suggesting a cliché, they must expect only the unexpected. But then, it is the best clichés that are true—usually.

Returning to the exhibition, one of its last pictures catches our attention—Klimt’s “Portrait of Amalie Zuckerkandl” (1917-18), which shows only her head and shoulders as complete, along with outlines and a few blobs of color for the rest of the work. Why does it stand out? Because this semi-completed work is a portent of things to come: she would eventually be sent to Theresienstadt concentration camp. It invites us to reflect on the collective poignancy of these pictures, for we know what their painters and sitters alike did not—how their collective story would end: the pistol shots in Sarajevo; the tramp of Nazi boots at the Anschluss; the slow rumbling of trains, eastward.

This was written under a Creative Commons License, with a few edits: https://creativecommons.org/licenses/by/1.0/