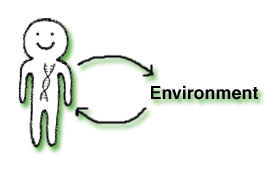 Inherited genes are considered to be the largest contributing factor to how people successfully stand up to challenges and influences of social and natural environments. Genes are to a large extent responsible for physical appearance, psychological traits, inclinations, and habits. On the other hand, the way a person is treated by their surroundings also shapes his or her views on life and other people. External environments affect the development of social skills, behavioral traits, controlled preferences, social beliefs, imposed cultures, and other traits. Thus, the question about which of these two factors is the most significant for individual’s development remains debated.

Among the environmental factors that can shape and influence a person’s general view and perception of life are: family support, peer pressure, educational background, engagement in hobbies, and successful career growth. These factors influence a person in terms of a stable personality and enhanced emotional security. A person can react or act against their external environment based on whether they see certain actions as acceptable or unacceptable in a particular surrounding. Aggressiveness, in its turn, can be caused by family problems, peer pressure, stress at work, and other personal concerns.

Intelligence quotients (IQ), special skills/attributes, physical appearance, physical strength, health conditions, and natural abilities, and talents are factors are inherited through genes. A person gifted with such positive genes as high IQ, pleasant personality traits, or an attractive physical appearance can have better chances of being successful in the long run than a person with the genes of a low IQ, unpleasing personality traits, and a short height. According to science correspondent Macrae Fiona (2012), genes can influence a person’s self-esteem, perseverance, direction, and social personality. However, the way a person was brought up by their family can also affect how they manage the given natural attributes. An attractive-looking and intelligent individual can still become or feel miserable and depressed despite their positive inherited traits. This may happen due to a lack of parental support, emotional support in early childhood, humiliation at school, or any circumstance that delivers a lack of aid. The same refers to individuals who have not been granted with high intellectual capabilities or a pleasant appearance; they can become incredibly successful and appreciated due to other traits: perseverance, hard work, personal charisma, or sophisticated manners and behavior.

The environment in which a person is meant to develop and shape their potential abilities can be considered an important factor of forming discipline, moral values, and personal development. According to a study conducted by Professor Mark T. Greenberg (2003), developing processes and systems within schools in order to enhance potential and reduce psychological difficulties of children can become a helpful tool in decreasing the number of children with immature development, psychological problems, and social difficulties.

Genes and environment are two important factors that affect an individual’s future, the quality of their life and relationships with surrounding people. Though debates are held about which of these two factors is prevailing in forming one’s personality, it can be said that they are both equally important for one’s development. Genes determine one’s possibilities, traits, and skills. It does not mean a person who has “an high IQ-gene” will become a genius though. It is the environment, the parental and emotional support, as well as relationships with a person’s society that determine whether these abilities and skills will flourish and develop. An individual with “beneficial” genes has the same chances to become depressed and miserable as an individual with “bad” genes. Therefore, both genes and environment are crucial for an individual’s balanced development.

Macrae, F. (May 2012). Born to Win! The Drive to Success is in Our Genes, Say Scientists—and DNA Dictates if We Triumph or Fail. Mail Online. Retrieved from:
http://www.dailymail.co.uk/sciencetech/article-2144826/Born-win-The-drive-success-genes-say-scientists–DNA-dictates-triumph-fail.html
Sincero, S. (Sep 2012). Nature and Nurture Debate. Explorable. Retrieved from
http://explorable.com/nature-vs-nurture-debate