Should Citizens Be Allowed to Bear Arms? 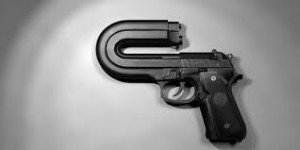 Living in a metropolis today is conjoined with a certain risk. Unfortunately, despite the scientific progress which has made the control over delinquency more efficient, crime still remains one of the most severe problems globally. According to FBI reports in 2011, the United States saw a violent crime rate of 386.3 offenses per 100,000 inhabitants, and the property crime rate of 2,908.7 offenses per 100,000 persons (FBI). Though these indexes may seem minor compared to the population in the USA, such rates can be called troubling. For the population to defend itself separately from the law enforcement authorities, Americans were granted with the right to purchase and store firearms. However, this measure is rather controversial, as its advantages are much less convincing and dangerous than its drawbacks.

The Second Amendment to the American Constitution gives citizens a right to bear arms to protect themselves from violent assaults. Unfortunately, reality shows that guns kept at home tend to be more dangerous for the members of a household than for potential criminals. According to Doctor Cesar Chelala, a gun stored at home is 43 times more likely to kill a relative than a robber (Common Dreams). Alcohol affectation, suicidal tendencies, jealousy, quarrels, mental disorders, even children’s negligence can lead to a tragedy with firearms involved. Even when injuries from domestic gunfire are non-lethal, the fact of using it against household members is disturbing. Besides, a house or an apartment is a rather unsafe place to keep firearms, for they can be stolen.

Using a gun for protection involves will and psychological readiness to hurt other individuals. For a psychologically normal person, it is a difficult task, except in cases of strong emotional conditions, such as panic. On the other hand, there are individuals who are prone to use firearms against others—the most debated cases refer to teenagers. Adam Lanza from the Sandy Hook Elementary School was known as an intelligent, silent teenager until he came to school with a gun and fatally shot 26 people—20 of which were children (CNN). Since 1979, gun violence has resulted in the deaths of 101,413 children and teens in the USA, which is more than the total number of American fatalities since the end of World War II, the Korean, Vietnam, Iraq, and Afghanistan wars (Common Dreams). For now, the American government cannot come up with effective methods of disclosing violent intentions of unstable individuals and thus does not fully protect the citizens from violence caused by its own laws.

Considering the instability of the human psyche, which can crumble in stressful life situations and push people to hurt others, every gun carrier can be considered a potential criminal, though this thesis may cause intense debates. Therefore, the universal right to bear arms does not simplify, but on the contrary, makes the government’s task of monitoring crimes even more complex. In societies where citizens are prohibited from keeping guns, law enforcement authorities can pay more attention to the search and liquidation of illegal weapons delivery channels than to watching over common citizens. Total control and monitoring over them assumes additional expenditures; at the same time, these funds could be used in other spheres.

A right to bear arms for common citizens is a double-edged sword, but one of these edges is much sharper than another. Though allowing people to keep guns at home can create an illusion of an additional measure of ensuring public order and private safety of each citizen, in reality, the Second Amendment only makes law enforcement more difficult. Common people can turn into potential criminals, or into individuals who are dangerous both for themselves and for others. Suicide and domestic violence statistics, as well as repeated cases of gunfire at schools, can serve as a sound illustration for such a thesis.