The modernization of influential countries such as China, as well as the increasingly energy-intensive lifestyle of the citizens of industrialized nations, such as the United States, demand inexpensive electricity. In order to meet this demand, new sources of energy are required. According to the U.S. Energy Information Administration, 90 percent of worldwide energy consumption in 2008 was generated by non-renewable sources (U.S. Energy Information Administration, 2011). Estimates on reserves of non-renewable energy sources vary but, by definition, they cannot last indefinitely. This essay discusses the advantages of nuclear power compared to alternative sources of energy such as wind power. While both types have significant hurdles to overcome, nuclear power is decisively the superior choice to meeting the world’s electricity demands. 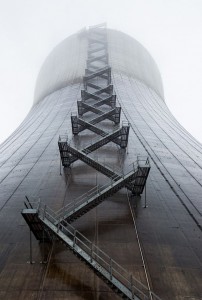 Nuclear fission power stations use the radioactive decay of uranium-235 to generate steam to turn a turbine and produce electricity. Uranium-235 makes up only 0.7% of all the uranium on Earth, yet reserves are estimated to last around 100 years (Sovacool, 2011). Newer “breeder reactors” that produce more fissile material than they consume could, in theory, provide enough nuclear fuel to last five billion years, making nuclear fission an essentially renewable energy source (Cohen, 1983). It is not only the amount of energy that can be produced, but the rate at which work can be done using this energy that is important. This is why it is beneficial to compare the power density of nuclear power to that of wind power. This is essentially a measure of energy produced in a given area in watts per square meter (W/m2). Wind energy has a power density of about 1.2 W/m2, while nuclear energy produces about 56 W/m2, a fifty-fold increase (Bryce, 2010). This means the amount of space required to operate a wind farm that matches the output of a 5 km2 nuclear power plant is about 250 km2, which is about the size of the world’s largest offshore wind farm, the London Array.

The cost of an energy source depends on several factors, such as capital costs for power plant construction, fuel costs, operational costs, maintenance, and decommissioning or waste disposal costs. Due to potential fluctuations in all of these variables, it is difficult to accurately predict the cost of a specific energy source. The levelized cost of electricity generated, expressed in dollars per MWh, is often used as a measure of competitiveness of energy sources. According to the EIA, the total levelized cost of nuclear and wind energy is $111.40/MWh and $96.00/MWh, respectively (U.S. Energy Information Administration, 2011).

Radioactive waste produced by nuclear power plants is becoming increasingly problematic for the widespread adoption of nuclear power as a primary energy source. High-level waste such as iodine-129 and neptunium-237 remain toxic to living organisms for millions of years and must be secured in a geologically-stable location until they decay into safer compounds. The engineering challenges are daunting. For comparison, the oldest-known structure in the world is the Necropolis of Bougon, dated back to 4800 BC. Accidents at nuclear plants are another source of pollution and public health risks. In 2011, the Fukushima Nuclear Power Plant in Japan suffered a series of failures, which led to the uncontrolled release of radioactive material. It remains a serious health risk to the Japanese population. In contrast, wind energy emits no waste, and the risk to living organisms is very low. Wind energy does require vast amounts of land, which can be environmentally destructive, depending on the region.

For small regions requiring modest amounts of electricity, wind energy provides an inexpensive and environment-friendly source of power. For industrial regions or areas of high population density, nuclear power is a better choice for power generation due to its extremely high energy and power density. Despite the environmental hurdles of nuclear power, it provides a relatively safe and near-limitless source of electricity for power-hungry economies and industries.