The Role of Nuclear Weapons in the Modern World 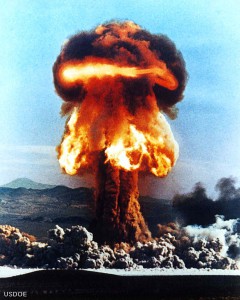 The world has witnessed only two cases of the use of nuclear weapons as an argument in war: when in 1945 the United States dropped Fat Man and Little Boy onto Japanese cities Hiroshima and Nagasaki. Despite the horrifying destructive power of nuclear weapons, countries not only did not cease to produce them, but on the contrary, started to seek ways of gaining such weapons of mass destruction. As a result, in the 21st century, the world is sitting on a huge nuclear bomb that can be armed at any moment. Respectively, the question arises: is the role of nuclear weapons for the modern world so significant that it justifies such risks, such status quo?

It may sound paradoxical, but the possession of nuclear weapons by countries serves as a guarantee of these weapons’ non-use. Governments avoid using nuclear warheads in conflicts against their opponents because of the danger that such weapons could be used against themselves in response. From this perspective, it does no matter anymore which country produced the first nuclear warhead. Nowadays, besides the U.S. and Russia, nuclear weapons are owned by India, Pakistan, Israel, and China. In addition, there are great concerns that Iraq, Iran, and North Korea can develop their own nuclear weapons programs (FAS). Considering the intense relationships between these participators in geopolitical processes, possessing nuclear weapons can be seen as a reasonable counter-measure against possible violent demarches from them.

At the same time, it is unclear why governments strive to produce and maintain such vast amounts of nuclear warheads. According to the data of the American Arms Control Association, today the U.S. and Russia own about 5,000 nuclear warheads each (ACA). Though the idea of storing such numbers of warheads is justified by the necessity to protect said countries and their allies, it still does not make real sense. Considering the destructive power of weapons produced today, as well as the fact that nuclear warheads are not meant to be used for assault, it seems that 10 times lower amounts would be enough for the proclaimed goals. This would relieve the economy, and besides, prove the peaceful intentions of all countries that own weapons of mass destruction.

In the context of the worldwide proclaimed struggle with terrorism, the issue of possessing nuclear weapons should be also analyzed in terms of the possibility of terrorists gaining access to such weapons. In the world where defense systems are operated through computer systems, physical control over warheads is not necessary; theoretically, a skilled hacker could break defense systems of a country of their choice, and gain advantage over opponents (Shmeller). And though chances of this are low, it still does not speak in favor of nuclear weapons. On the contrary, it becomes yet another factor of anxiety.

Nuclear weapons are perhaps the most powerful means of warfare in the modern world. On one side, nuclear weapons help to maintain the geopolitical balance of powers, and act as a guarantee and preventive measure of possible assaults. On the other hand, a set of factors proves that nuclear weapons are not worth the expenses of their maintenance as well as risks connected to their possession. Among these factors, a huge economical burden and a chance of terrorists seizing control over them seem to be the most obvious.