Journalists know today’s news is tomorrow’s fish and chips wrapping. Artists tend to forget this harsh truth. A century ago, the Modernists doubtless thought that they were the last word in their particular artistic spheres—little did they know that Modernism was not the end of the creative line, would end up as just another movement to be ploughed through by students of cultural history. The Young British Artists—YBAs—who sprang to fame back in the 1990s, did well for themselves but are in danger of being regarded as having limited relevance today because of their association with the cursed Y-word. This exhibition is a chance to deliver someone from that curse, see if what her work says is still fresh, and to examine some hard contemporary truths regarding the judgement of art. 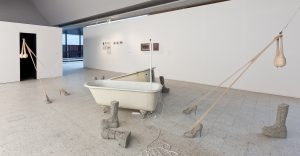 The career path of Sarah Lucas has been meteoric. Born in 1962, she studied in London at the Working Men’s College, the London College of Printing, and Goldsmith’s College. In 1988, she exhibited in the groundbreaking “Freeze” exhibition, curated by Damien Hirst. Her first solo exhibition was at a disused betting shop, City Racing, in south London which featured her work “Penis Nailed to a Board,” based on a tabloid newspaper article concerning S&M sex, which was later exhibited in the controversial “Sensation: Young British Artists from the Saatchi Collection” exhibition at the Royal Academy in 1997. Later, she would garner praise and publicity with works such as “Human Toilet Revisited| (1998), a color photograph of her sitting on a lavatory whilst smoking a cigarette. Her recent activities have included being exhibited at the Venice Biennale in 2007 and, five years later, curating the “Free: art by offenders, secure patients and detainees” exhibition at London’s Royal Festival Hall.

So, what works from Lucas do we see here? Catching our attention is “Sod You Gits” (1990), a blown-up newspaper feature about a kissogram girl. “Two Fried Eggs and a Kebab” (1992) is a sculpture where, on a table, these culinary items form female breasts and genitalia. “Get Hold of This” (1994) is a sculpture showing strong, grappling arms. From the same year is her photograph “Self Portrait with Knickers,” showing the artist in front of a knicker festooned washing line whilst “Au Naturel” (also from 1994) gives us a mattress with melons, oranges, a cucumber, and a bucket strategically arranged to summon up male and female private parts. “Is Suicide Genetic?” (1996) is a question we are asked by a work that comprises a grubby lavatory pan with those words written inside it. Her “Self-Portrait with Cigarettes” (2000) shows the artist’s face outlined in cigarettes and with an expression hovering between the sad and the wistful.

Looking at what is on offer here, it is easy to say that Lucas, in her work, has aimed for creating headline-grabbing scandal-provoking material rather than art. Just as it is easy to side with those who felt that, at the Momart fire—when, in 2004, a number of famous YBA works were destroyed by a conflagration whilst in storage—those artists got what they deserved for producing meretricious, attention-seeking work with which they could fool the public and make a lot of money whilst doing so (more of all this in a moment). But the option of a simplistic put-down—attractive though it may be—is to be resisted in favor of a deeper analysis. The first issue to examine here is whether Lucas, arguably, has let herself down as a serious artist by adopting a playground-vulgarity-cum-cartoonish style which detracts from any important points she might wish to make about the human body in general and female sexuality in particular. “Self-Portrait with Skull” (1996/2013), showing the artist sitting with a skull between her thighs and which greets us at the top of a staircase in the gallery, and “Nice Tits” (2011) consisting of bulging, wobbling, breast-like tights on a wire mesh frame with concrete thighs boots beneath, raise issues about sex and death, and the objectification of women. But Bruegel and Goya did a good job of giving a no-holds-barred assessment of humanity think in particular of the latter’s series “The Disasters of War,” conveying the savagery of the Peninsular campaign against Napoleon—with straightforward realism.

Having said all that, if Lucas has simply been aiming for a sort of Carry On nudge-nudge wink-wink ethos—or the kind of social shock engineered by a child shouting-out “naughty” words at an adult gathering, then her work succeeds very well indeed and follows a well-established, and commendable, tradition of British vulgarity which gives a joyous two fingers to Puritanism, artistic and political alike (incidentally, given her status as an epitome of urban cool, it is both amusing and strangely touching when we know that, for a time, she considered relocating to Oxford as she was a fan of that city’s fictional television detective, Inspector Morse).

That being said, the matter remains that Lucas’s work is an example of the works of art produced by the YBAs, which raise the suspicion that, among some of their number at least, those artists have used their work primarily as a way of garnering fame rather than as a medium of artistic depiction, expression, or investigation. A desire for publicity and its financial usufructs has, seemingly, predominated above all else. If so, the YBAs have simply followed a well-trodden path. By the early years of the twentieth century, the figure of the bohemian bad-lad artist who got fawning recognition from the establishment—giving him glory and fame (and a chance to indulge his belly and groin to the full) while letting his patrons indulge in feeling of “street-cred” superiority over their fellow bourgeoisie—was a well-established role-model (and, arguably, one which would not be lost on certain rock musicians from the 1960s onward, a number of whom had started their careers at an art college).

And can we blame Lucas and other YBAs for seeming to take advantage of a situation which had arisen due to a fear of appearing judgmental, whether in the arts or in any other sphere? When nobody is prepared to stick their neck out and say whether a work of art is good or bad on any aesthetic or moral grounds, then the volume of publicity and money it generates might be the only yardsticks by which its merits can now be judged. The ideas of art offering a form of aesthetic pleasure, spiritual solace, or social commentary are altered, if not lost entirely. The YBAs, in their approach to artistic creation, thus have roles of dual significance, both as artists and gold-diggers, for they make us reconsider the possible purposes of art and the criteria for its assessment. They achieve, therefore, an importance for raising these issues, even though this may be far from the type of artistic status they originally sought. The work of Lucas is valuable here as it continues to pose these questions—even if they are ones which she many not have intended to bring before the public.

Written under a creative commons license, with edits: https://creativecommons.org/licenses/by/1.0/