What is So Important about SpaceX? 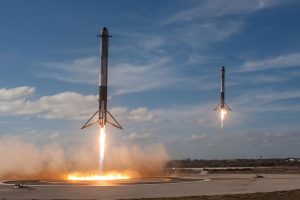 From a historical perspective, humanity started to conquer space seemingly yesterday; Yuri Gagarin’s flight around Earth’s orbit and America’s landing on the Moon gave birth to a new era in science. At the same time, colonizing space has been a dream of many scientists, fiction writers, and romantics long before the first rocket was launched; and now, in just several years, this dream can finally come true—all due to one man’s devotion. Elon Musk’s SpaceX program, a private initiative of building a self-sustaining colony on Mars, is shockingly close to opening a new page in the book of humanity’s wanderings. During the course of his research, Elon Musk’s team faced a number of challenges, solving (or struggling to solve) problems that have been puzzling the minds of scientists all over the world for decades. And although for uninitiated people, phrases like “vertical landing” or “first-stage landing” might not sound as substantial as “landing on Mars,” the accomplishments of Elon Musk’s program are, in fact, revolutionary. But what exactly makes SpaceX so important?

Talking about SpaceX is impossible without mentioning Elon Musk himself. He believes colonizing other planets is not just a fantasy, and that it can become real in the next few years. This is a romantic and inspiring vision; at the same time, however, Must realizes that the existing technologies do not allow for space colonization, and that there are a number of problems that have for a long time remained unsolved. Thus, recognizing the existing challenges, he seeks ways to overcome them, and this is what the whole SpaceX project is about. According to Musk, there exist several milestones that modern science must achieve in order to be able to leave Earth. One of such milestones is the lowering of the price of rockets; those existing now are enormously expensive to both construct and launch—for example, one launch of such rockets from the United Launch Alliance or Orbital Sciences costs about $225 million. So, Musk’s first step was to build a cheap rocket. He (meaning, his company) succeeded: Falcon 9, the rocket developed by SpaceX, costs almost four times less in terms of launching—only $61 million per launch. At the same time, Falcon 9 may not be large enough to deliver much cargo to the orbit, or to the planet itself, so the next step for Musk’s team was to create a bigger, more spacious rocket (Global News). Needless to say that with the decrease of the costs of construction and launching, along with increased cargo capacity, SpaceX Falcon 9 rocket opens new horizons to space industry, as well as provides humanity with a powerful tool for future space colonization. However, there is more to it.

The problem of all modern rockets is that they are, in fact, disposable. Their technical characteristics imply a landing procedure during which a rocket sheds off the majority of its parts, leaving only a module with cargo or astronauts in it. This means this rocket obviously cannot be used in the future again. SpaceX faced this challenge, and it looks like Musk’s company overcame this conundrum. In 2015, SpaceX successfully completed a vertical take-off. The rocket carried a payload of commercial satellites on board, deployed them in a vertical landing procedure (VTVL)—once again, with its Falcon 9 rocket and then successfully returned back to Earth, in one piece. More specifically, the rocket’s reusable main-stage booster returned from the orbit to its launchpad at Cape Canaveral, thus becoming the first rocket that can be regularly used for commercial purposes (The Indian Express). Combined with the decreased construction and launch costs, such reusability makes Falcon 9 an even cheaper and more favorable alternative to other existing rockets, and perhaps the only—at least for now—spacecraft able to assist humanity in space colonization. Musk believes Falcon 9 can be “used almost indefinitely so long as there is scheduled maintenance and careful inspections.” The Falcon 9 Block 5, the final version of the series, is perfectly suitable for easy reuse (University Herald).

The plans Elon Musk and SpaceX have are much greater than just delivering cargo to the orbit, though. Musk’s idea is to send 1,000 spaceships with 100 people each to the Red Planet. To make this process safer in many ways, SpaceX will first construct a refueling station on Mars; after this, a spaceship with the equipment necessary for constructing a station will be sent. Talking about the Interplanetary Transport System, Musk explained that it will first be configured in a way focused on cargo rather than on passengers; all other details will be revealed in several years (UniversityHerald).

As it can be seen, Elon Musk and his SpaceX company has approached the problem of space colonization more than seriously. Whereas the older generation of rockets did not imply reuse due to technological handicaps, SpaceX Falcon 9 rockets are perfectly suited for continuous and regular usage. Their costs are almost four times cheaper in terms of launching—$61 million against $225 million—and the fact that there will be no need to build a new rocket every time the previous one completes its mission in space makes SpaceX‘s solution even more attractive in terms of economics. Such reusability has been achieved, in particular, due to the “vertical take-off—vertical landing” technology; unlike the older technology that implied that a rocket needed to shed its stages in the process of landing, Falcon 9’s main-stage booster is capable of returning back to the launchpad in one piece. This, as well as Musk’s grandiose plans for the nearest future, makes it easy to believe that in just a decade or two, humanity will be able to not only set its feet, but live on Mars. And, probably, on other planets as well.