Global Warming: Why Does It Happen and What Can We Do to Reverse It? 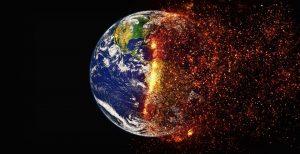 Earth has been heating and cooling for centuries, and this fact hardly bothers climatologists. According to NASA, Earth’s orbit fluctuates from time to time, and such a change varies the amount of solar radiation our planet receives (Climate change: How do we know?). In some respect, we can say that a kind of global warming pushed the Ice Age to its extinction. Climates never stay the same, and this has been the case for hundreds of thousands of years. But things have changed dramatically over the last century, and today we observe that warming has accelerated far beyond the limit.

The 1950s became the tipping point for environmental scientists. The average temperature on our planet has risen to about 1.62 degrees Fahrenheit since then. The level of carbon dioxide emissions became twice as large as it had been at any peak of natural heating-cooling cycles recorded before the 1950s (Climate change: How do we know?). From this time on, the temperature on the planet rose, oceans warmed, glaciers shrunk, and areas covered with snow visibly decreased. All of that change happened over some 60 years.

Climate is changing at an unprecedented speed now, and few scientists dare deny that. Human activity is the most popular explanation to the phenomenon of global warming. So, how is this happening? By emitting a tremendous amount of greenhouse gas every day.

Sunlight always passes to the surface of our planet, and a certain part of it is reflected back to space. However, a great amount of heat is trapped in the atmosphere due to greenhouse gases. These are the notorious carbon dioxide, methane, nitrous oxide, and even water vapor. All of them create a shield that keeps heat close to Earth and does not let it out into space. But what exactly do we do to release that much greenhouse gas?

Industries are the first to blame for starting global warming. The amount of CO2 has increased by more than one-third since the Second Industrial Revolution of 1880. It was the one that brought most of the technological advancements to industries. This fact builds the direct link between human activities and the carbon dioxide released. Scientists also operate with other theories of global warming and why it emerged, but the impact of new industries remains undeniable.

Burning fossil fuels is a tremendous part of industrial and domestic human activities, which results in climate change. According to the US Environmental Protection Agency, the greatest part of coal and oil consumption goes to transportation, the work of power plants, industrial facilities, single households, and agricultural businesses (Sources of Greenhouse Gas Emissions). The abundance of transport—ships, trains, and planes—made even such a gross consumer of fossil fuels as the power economy the second biggest CO2 polluter.

So, we actively burn fossil fuels, and thus create global warming. Rising temperatures make our living uncomfortable, but our everyday comfort is not the biggest problem. Hundreds of species are losing their habitats because ice caps are shrinking and the water in the ocean has become too warm for them. Polar bears, frogs, and corals are hit the hardest by global warming according to the UN’s Intergovernmental Panel on Climate Change (7 Species Hit Hard by Climate Change—Including One That’s Already Extinct).

The rise of sea levels caused by melting glaciers has already pushed out the populations of coastal species. Unfortunately, there is more harm to be done. As the ocean warms up, more powerful storms will come, and natural disasters will intensify. A rapid climate change is the direct cause of the most destructive recent natural catastrophes.

No doubt, boosting global warming is much easier than taking even a slight attempt to curb it. But we have to take action if we want to save our own natural habitat at the very least. Non-governmental organizations, like Greenpeace or the UN, constantly work on their missions that concern improving the environment. Governments around the world impose strict emission quotas on their industries, as China did in 2017.

As individuals, we can sufficiently reduce our carbon footprint if we choose to live green. It sounds complicated, but it is easy to start. Just by installing LED bulbs and pulling out the plugs you do not need, you will save a considerable amount of energy in your household monthly. In a while, you may install solar batteries or buy an electric-powered vehicle. You do not need to go entirely green in a day or week. By following these simple rules, you will realize how much your carbon imprint has reduced.

Besides consuming less electricity, there are other ways for us to ease global warming.
Turn to reusing and recycling. During your everyday shopping, dismiss buying plastic bags and take a durable cloth bag you can use for months before it wears out. Buy drinks in recyclable glass bottles you would dispose of separately.

Participate in your local recycling initiatives. It is easy to use those bins for different types of waste like glass, plastic bottles, and paper.

“Climate change: How do we know?” NASA, https://climate.nasa.gov/evidence/