The Conundrum of Overpopulation

Back in 8000 B.C., the world was inhabited by a measly 5 million people, roughly the population of Papua New Guinea today. Currently, Earth contains 7 billion people (Then and now, n.d.). The world faces the problem of severe overpopulation; the global population continues to rise at a rate of roughly 78 million people per year, most of which are born in sub-Saharan Africa and the south and west of Asia. Such a massive population is difficult to sustain, since the resources needed for such a sustenance are limited. This results into a grim hope for future generations. Therefore, the problem of overpopulation needs to be solved in the nearest future. 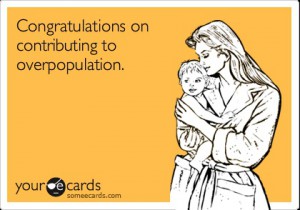 The root cause of unwanted population growth around the world cannot be pinned-down to one reason. It is a complex, multi-faceted issue with a myriad of affecting factors. If history is any evidence, population explosions have coincided with three major technological progressive movements, marking significant eras in the history of time. These are the tool-making revolution, the agricultural revolution, and the industrial revolution (Deevey.E.S., The Human Population, 1960). Additionally, scientific leaps help reduce causes of death, causing the birthrate to exceed the death rate. For example, owing to improved sanitation, child immunization and advanced medicine, today about 95% of newborns in industrialized nations reach adulthood (McKeown, The Origins of Human Disease, 1988). From a psychological perspective, poverty stricken households with less-educated backgrounds tend to overcompensate for their lack of capabilities by having a large number of children.

Earth can uphold 1/7th of its current population in order to give each inhabitant a high quality standard of living. The existing world scenario paints a dim picture. Resource shortages, environmental disasters, multi-layered pollution, mass species extinction, soil erosion, the destruction of forest cover, high infant mortality rates, elevated crimes, inflation, and so forth are only some of the many negative consequences of overpopulation. The Chair of the National Academy of Sciences Panel on Global Warming calls population growth the driving force in global warming (Global Population Concerns, n.d). Industrial and housing projects cannot be handled by the limited land and resources present in today’s world. The unimaginable hike in fuel prices is bound to increase in demand for the energy-producing resources that Earth cannot cater.

The solution for overpopulation is far from easy to implement. Expensive and painstaking campaign strategies have been employed to curb this global dilemma, but no affirmative action has proven effective enough. China has managed to reduce its population through legal affirmative action: the first offspring of a family receives free education and healthcare up to adulthood, but the second offspring is not given these advantages. The Indian ‘Us Two, Our Two’ campaign was targeted at inculcating family planning in the mindsets of the lower sections of Indian society.

Despite capitalist views, such as the rise in population undeniably benefits investors and entrepreneurs as a larger audience virtually facilitates growth in the global economy, overpopulation is detrimental (Trivium, What is the Ideal Population of the World, 2009). A larger population may benefit business markets and its industries, but population control is in the best interests of the world at large. Earth does not have infinite resources, and there are only so many mouths it can feed, and only so many bodies it can house. There is a pressing need to stabilize the world’s population.

Then and Now, n.d., National Geographic, retrieved on 2013, February 6 from http://www.nationalgeographic.co.in/eye/overpopulation/effect.html.

Trivium, 2009 August 18, What is the Ideal Population of the World, The Platonist,
retrieved on 2013 February 6 from http://triviumquadrivium.wordpress.com/2009/08/28/what-is-the-ideal-population-of-the-earth/.