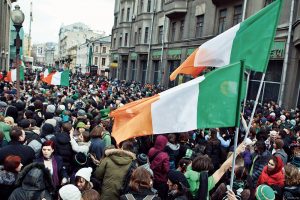 St. Patrick’s Day, even for the Irish, is often shrouded in mystery, or people rarely consider it necessary to look up the significance of this holiday. Mostly, it is seen as a day to wear green and get drunk at the pub with friends. But is there a deeper meaning behind this Irish celebration? In order to uncover the details, the life of Saint Patrick will be discussed, as well how the holiday came into being and how it is celebrated.

Saint Patrick is seen as the foremost patron saint of Ireland. Saint Patrick is, “credited with bringing Christianity to Ireland and probably responsible in part for the Christianization of the Picts and Anglo-Saxons. He is known only from two short works, the Confessio, a spiritual autobiography, and his Letter to Coroticus, a denunciation of British mistreatment of Irish Christians. Since his writings have come to be better understood, it is increasingly recognized that, despite their occasional incoherence, they mirror a truth and a simplicity of the rarest quality” (O’Raifeartaigh, Tarlach). So, despite the many legends about him, he was a real person that contributed to bringing Christianity to the masses in Ireland and for his easy-to-read pieces of writing.

In regard to the legends, there are quite a few. It is not surprising since he was such a pivotal figure in Irish history. The main legend pertains to him driving snakes to the sea. Other legends are, “…that he raised people from the dead, and a 12th-century hagiography places this number at 33 men, some of whom are said to have been deceased for many years. He also reportedly prayed for the provision of food for hungry sailors traveling by land through a desolate area, and a herd of swine miraculously appeared. Another legend, probably the most popular, is that of the shamrock, which has him explain the concept of the Holy Trinity, three persons in one God, to an unbeliever by showing him the three-leaved plant with one stalk” (O’Raifeartaigh, Tarlach). The historicity of these claims cannot be verified, but they add to the magic of St. Patrick’s Day.

St. Patrick’s Day marks the saint’s death day, March 17th, 461 AD. In early 17th century, this day was made into a feast day that is now celebrated in the Catholic Church, the Anglican Communion, the Eastern Orthodox Church, and the Lutheran Church. According to Ireland.com, “Raise your glasses to Luke Wadding, an Irish Franciscan friar from Waterford whose persistent efforts turned March 17 into a feast day” (“9 St Patrick’s Day Facts”). So, Luke Wadding is the main propagator of the feast and ultimately the holiday. Officially, the celebration commemorates the bringing of Christianity into Ireland and Irish culture in general. Though religious Irish people might attend church services on this day, it is also a lenient day where the ban on drinking alcohol is often lifted. That is why the holiday is commonly associated with drinking beer (Moore, Willard B.).

Though Ireland certainly makes a big deal out of St. Patrick’s Day, it is often the Irish diaspora in North America and other areas that perhaps put on the biggest show. Parades, parties, mischief, and Irish pride is on display on March 17th in most cities of large Irish populations outside of Ireland. In terms of parades, “the first St Patrick’s Day parade was not held in Ireland at all, but in Boston in the United States in 1737. This was followed by an “official” parade in New York in 1766. Ireland was a little further behind – our first parade was held in Waterford in 1903, while Dublin joined the club back in 1931” (“9 St Patrick’s Day Facts”). Another interesting fact is that the wearing of green on this holiday only started in the 19th century, and before that time, mostly people wore blue for the celebration (“9 St Patrick’s Day Facts”).

St. Patrick’s Day is a joyous celebration of Irish heritage, culture, and more historically, the bringing of Christianity to Ireland. The tradition of going to the pub, wearing green, and putting on parades came much later in its history, as it first started as a religious feast in the 17th century, despite St. Patrick dying in 461 AD.

Moore, Willard B. Circles of Tradition: Folk Arts in Minnesota. Published for the University of Minnesota Art Museum by the Minnesota Historical Society Press, 1989.