Strictly speaking, the first recorded conception of a god by humans began a long, long time ago. Whether we imagined these gods, or people people felt a connection to these supernatural beings, this is not so much of the question. Travelling through the history of human religious rituals is a fascinating journey, and it begins around 40,000 BC.

The earliest burial remains of homo sapiens is near Lake Mungo in Australia. Many people believe this recorded burial is a sign of religious practice, but the god in which the people worshiped at the time is not known, if any (Bowler, J. M). On the other hand, earlier hominids had been burying their dead. Stated on the website British Archaeology, “Some of the earliest evidence for the deliberate disposal of the dead was found in Pontnewydd Cave in Wales. According to Stephen Aldhouse-Green the fragmentary remains – teeth – of early Neanderthals suggest that at least five and possibly up to 15 bodies may have been deliberately placed in the dark recesses some 225,000 years ago” (Pettitt, Paul). This means that our ancestors have possibly been involved in religious activity since our earliest beginnings. 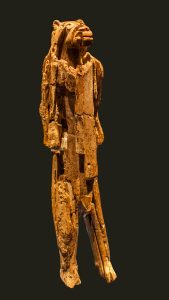 The next step in understanding religious practice among humans comes from the Lion-man of the Hohlenstein-Stadel. It is dated from 40,000 to 35,000 BC, and was discovered in Germany. It is the oldest-known zoomorphic figure, with the head of a lion and the body of a human (though the gender of the figure is not agreed upon). Different interpretations are made about the figure, but it being supernatural in form has given way to researchers suggesting it is perhaps the first known deity (Bailey, Martin). In fact, other such figures have been located in the area, and anthropologists believe that this figure was an important mythological creature for these early humans in what is now Germany.

As time went on, burial rites became more elaborate, and there were signs of religious or spiritual practices. Burials in the period between 27,000 BC and 23,000 BC had peculiar characteristics. According to British Archaeology Magazine, “All these burials incorporate the heavy use of red ochre, and include the bones of large herbivores such as aurochs, mammoth, bison or reindeer – totemic animals often depicted on cave walls in this period. The earliest of the group are the ‘Red Lady’ of Paviland (BA, October 2001) and three young adults buried together at Dolni Vestonice in the Czech Republic. A little later came the burial of a small child at Lagar Velho in Portugal, wearing a periwinkle shell, and a young adult male at Brno in the Czech Republic. His heavily weighted clothing, marionette or doll, and possible drumstick have led some scholars to see him as a shaman” (“When Burial Begins”). At this time, a “human revolution” began in culture and technological development, and it was evident in their burials. The usage of red ochre and other ornaments is commonly attributed to being seen as sacred relics.

Around this same time, “Venus figurines” were being made and placed in graves. What is intriguing to note is that most remains of early humans are male, but during this period, they were commonly accompanied by female figurines. At this moment, we have no clues as to what these “Venus” sculptures were for exactly, but it has been cited as representing a goddess. However, other theories propose that women were not buried often in these early cultures, and only figurines were constructed to represent them. Whatever the case is, these “Venus” miniature sculptures provide archaeologists with another concept for early religious practice (Pettitt, Paul).

Spiritual practices resembling a religion can be found throughout much of ancient history, though it can be said that Hinduism is the first recorded religion and oldest living one, with the Rig Veda written around 3,500 BC (“8 Oldest Religions in the World”). But around the same time in Sumer, written records began to appear about the god Marduk (Mark, Joshua J).

It is difficult to say what the first religion was, as we have signs of spiritual traditions from 225,000 BC. However, to say conclusively about the first recorded religion, it is either Hinduism or the Sumerian belief in the god Marduk. In time, a new story about the earliest religion might be written.