What Comprises a Brain? 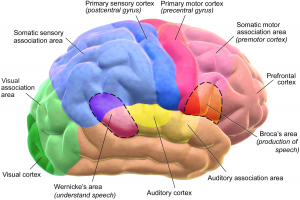 The brain, despite popular belief, is not like a computer. In fact, we cannot find out how to artificially create a thought through technology or replication (at least at this point). But even though we are not exactly clear on how the brain works, we do know about its parts and its functions. There are three main parts of the brain: the cerebrum, the cerebellum, and the brainstem. We will go over these three areas in detail in the following paragraphs, including the various lobes that accompany these sections of the brain.

Hitting it off, the cerebrum “is the largest part of the brain and is composed of right and left hemispheres. It performs higher functions like interpreting touch, vision and hearing, as well as speech, reasoning, emotions, learning, and fine control of movement” (Spinal Cord Stimulator). The two sides of the brain have varying functions, and both sides are joined by a bundle of fibers named corpus callosum. This part sends signals or messages from one side to the other. Though the left and right brain hemispheres of the brain are connected, they display different functions. According to the Mayfield Clinic, “In general, the left hemisphere controls speech, comprehension, arithmetic, and writing. The right hemisphere controls creativity, spatial ability, artistic, and musical skills. The left hemisphere is dominant in hand use and language in about 92% of people” (Spinal Cord Stimulator). This means that while some tasks are interconnected, a large part of the duties of the brain are divided into two sections with their separate responsibilities.

Getting to the cerebellum, it is under the cerebrum, and its purpose is to provide muscle coordination, correct posture, and the right physical balance. Based on information from Health24, “New research has also linked it to thinking, novelty, and emotions. The limbic system, often referred to as the “emotional brain”, is found buried within the cerebrum” (“Brain Areas and Their Functions”). So, even though this part is smaller than the cerebrum, it is maybe what makes us the most human.

The brainstem looks trivial if you see it in a diagram, but this is far from the truth. Mayfield Clinic states that the brainstem, “acts as a relay center connecting the cerebrum and cerebellum to the spinal cord. It performs many automatic functions such as breathing, heart rate, body temperature, wake and sleep cycles, digestion, sneezing, coughing, vomiting, and swallowing” (Spinal Cord Stimulator). It is not a stretch to say that without the brainstem, much of what we do without thinking or conscious effort would be dismantled and we would not be able to live.

Now that we have gone over the three major parts of the brain, let us discuss the lobes that are divided into four sections in each hemisphere of the brain. We got the frontal lobe, parietal lobe, occipital lobe, and the temporal lobe. According to Health24, the frontal lobe “is concerned with emotions, reasoning, planning, movement, and parts of speech. It is also involved in purposeful acts such as creativity, judgment, and problem solving, and planning” (“Brain Areas and Their Functions”). Turning to the parietal lobe, its focus is on interpreting language and words, processing the sense of touch, pain, and temperature, interpreting information from our sensory perceptions and memory, and finally spatial and visual perception. The occipital lobe is more simple, with one only function: interpreting vision, which comprises color, light, and movement. However, with the temporal lobe, we get into more serious country again. In fact, there are temporal lobes on both sides of the brain, and they “are responsible for hearing, memory, meaning, and language. They also play a role in emotion and learning. The temporal lobes are concerned with interpreting and processing auditory stimuli” (Health24). As you can see, each of the lobes have specific roles that intertwine and overlap in duties.

The brain is super complex. In fact, knowing how the brain works in its entirety has not been achieved. However, we do know what comprises the brain and these parts’ functions. With the cerebrum, the cerebellum, and the brainstem, and the four lobes that are integrated into these sections, we understand how the brain operates, but not exactly how consciousness and original thought is formed.