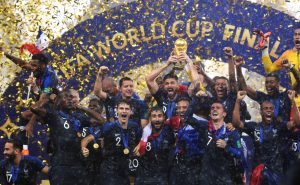 Also called the FIFA (Fédération Internationale de Football Association) World Cup, this event is one of the most riveting and most-watched in the world. The World Cup displays the best of men’s national football teams around the globe traditionally (women had their first world cup starting from 1991), with one champion standing at the end of the competition. With football being perhaps the most popular sport worldwide, the World Cup is the climax of excitement for countless fans. However, most fans do not know much of this competition’s history and background. Therefore, this essay will delve into the depths of the World Cup’s past.

International football matches were being held long before the World Cup originated. The first international football match was a challenge between Scotland and England in 1872 in Glasgow. It was a tough match that ended in a draw with 0-0. At this time, football was not that popular internationally, and was not recognized as an Olympic sport. The match was reported on in Bell’s Life in London and Sporting Chronicle on Sunday 1, 1872: “A splendid display of football in the really scientific sense of the word, and a most determined effort on the part of the representatives of the two nationalities to overcome each other. The only thing which saved the Scotch team from defeat, considering the powerful forward play of England, was the magnificent defensive play and tactics shown by their backs, which was also taken advantage of by the forwards” (England Football Online). It was seen as a friendly match and an exhibition of international tournaments to come.

Though England versus Scotland was the first international match, the initial international football tournament happened in 1884, at the first British Home Championship. It featured national teams from Scotland, England, Northern Ireland, and Wales. According to the National Football Museum, “The first game took place on 26 January 1884 between Ireland and Scotland in Belfast, ending in a 5-0 win for the visitors. Unusually, Ireland were involved in all of the first three matches, these games all taking place within a four week period. This may have accounted for their heavy losses, but the deciding match proved to be Scotland’s 1-0 win against England at Glasgow’s Cathkin Park in March” (“The British Home Championship”). For most of the late 1800s, Scotland was the top team in the world. This is in contrast to the national team of present Scotland, that rarely does well in the World Cup.

From this first international tournament, football grew in popularity in the 20th century. It became more widespread in areas outside of the United Kingdom. By the year 1900, football was included as a sport in the Olympics, though it was labelled as a demonstration sport with no medals given (however, medals were retroactively given). Great Britain won first place, France won second place, and third place was given to Belgium. Football was also included in the 1904 Summer Olympics. In the 1906 Intercalated Games, another international tournament was played. According to the report, “Four teams entered the football tournament, one from Denmark and three from Greek cities, of which two (Smyrna and Thessaloniki) were then part of the Ottoman Empire. While the Athens and Thessaloniki teams consisted of Greek nationals (the Thessaloniki team featured one English national), the Smyrna side was composed of sons of foreign (English, French and Armenian) merchants in the city (nowadays called İzmir)” (“Intermediate Games of the IV. Olympiad”). This competition seemed to be more bent on political participation than on the actual strength of the teams.

FIFA was founded in 1904, and through its organization, it did its best to organize an international tournament outside of the Olympics in 1906 in Switzerland. However, the tournament can be described as a failure. According to FIFA.com, “Various national associations had major worries, with the French governing body divided internally. These difficulties were a heavy burden for the FIFA President who had set about his tasks with so much enthusiasm. Guerin increasingly withdrew from the sport and handed over the administration to Vice-President Schneider and Espir, his personal assistant” (FIFA.com). Despite the fragmentation of governing bodies, the first World Cup (though not officially recognized currently), featured 12 teams, with Uruguay being the surprise champion over second-place Austria, third-place Argentina, and fourth-place England (“1906 FIFA World Cup (AEWCF)”). From this messy first World Cup came many more Olympic football matches and a clear organization for the World Cup in the 1930s.

Though many more details could be added, it can be seen that the rapid growth of football as an international sport gave way to the World Cup and it being included as an Olympic sport. The oldest football clubs were organized in England, and from there it spread through Great Britain. After several international tournaments featuring Scotland, Wales, Ireland, and England, it became an Olympic sport. Subsequent to the sport being an Olympic sport, FIFA was put together, and although the first World Cup of 1906 was deemed a failure in terms of its organization, it marked the beginning of the most-watched sports event in history.