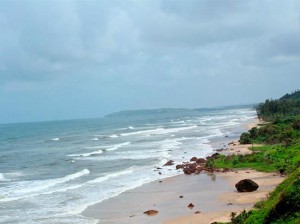 I was on vacation in Ganapatipule, which is a town on the coast on the west side of India, situated right on the Indian Ocean. I was with my long-time friend, Janu, and his mother, staying in a hotel for a few days. The vacation so far was the embodiment of relaxing: eating fresh mangoes, waking up late, dining out all the time (mostly fish curry), swimming a few times a day in the Indian ocean, and joking around with old pals.

Around three in the afternoon on a cloudless day, the beach on our side was empty of people besides my friend, his mother, and I. It was freeing to be alone on this vast beach, known to be a holy place among Hindus. Ganapatipule is named after the god Ganesh, and there is a famous Ganesh shrine near there where a swayambhu (a sculpture erected from the earth itself in the form of a god) is worshiped. Bathing in the ocean around this area is supposed to cleanse people of their negativity and visiting the shrine also purifies individuals as well.

As I started to swim in the warm ocean, jumping over waves, I left my friends behind. I was wearing a white kurta, or a traditional garb for men in India, which was heavy in the water, but my feet was easily touching the ocean floor at all times. I usually washed my clothes by swimming in the ocean when I was there.

But at one instant, I felt that my feet could not touch the ocean floor anymore and I plunged into the water, weighted down by my clothes. The waves kept coming and now they were menacing, as I was getting sucked into the depths every time they came—even if I rose out of the water and tried to swim back to the part of the ocean where I could get a foothold. I had been sucked into a riptide, in fact, and was stuck in a dipping valley, despite my hard efforts to reach safety and my yelling to my friends in the distance.

After struggling heavily for a few, long minutes to go against the suction of the riptide, and shouting to my friends in the distance near the shore to no avail, I began to relax, accepting my fate. I no longer fought to reach the edge of the ocean valley to get a foothold, and in the process of being pulled into the ocean and coming back up to the surface, I talked to God out loud. I discussed what I had did wrong in my life and what I did right. I concluded in reflection that my life was fulfilling overall, and I felt ready to die, accepting the present circumstance as reality.

Yet as soon I surrendered myself to the situation, a huge wave came and pushed me out of the riptide and the deep valley I was sucked into. On the drift of the wave, I landed near my friends, who seemed astonished at my expression and my words of description. They were unaware that I had been trouble. But it did not matter at the time—I was happy to reach land again and felt my life was renewed.

I later learned the time I swam was inauspicious for swimming at Ganapatipule, as the natives believe the god Ganesh bathes around three in afternoon in the ocean there. It was as if Ganesh forgave me for the intrusion, and released me from the anger of the ocean against divine protocol.